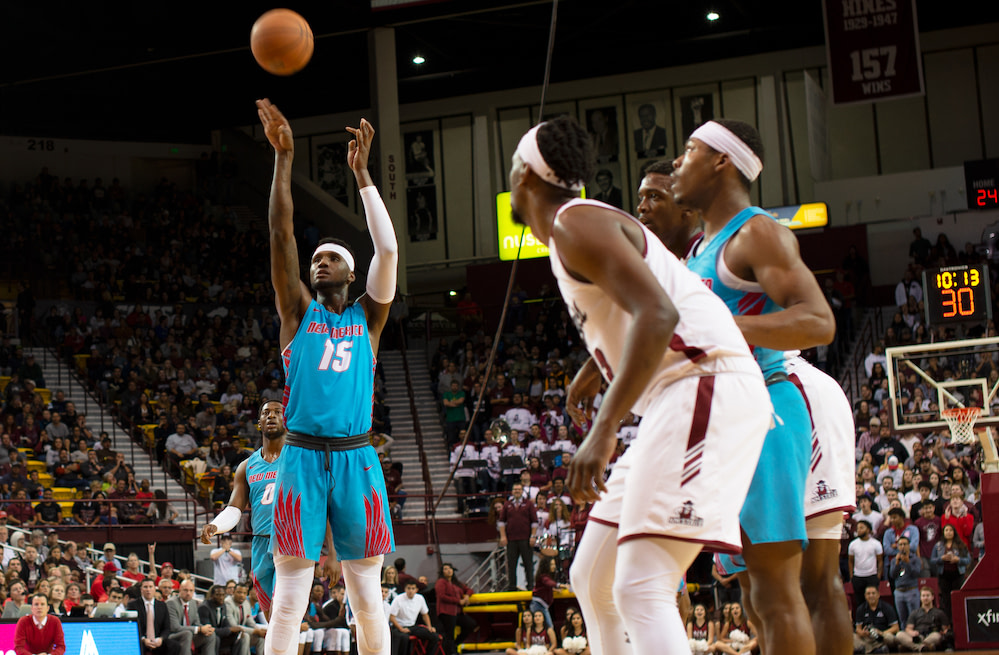 Weir gets first victory against NMSU

University of New Mexico head coach Paul Weir finally got his first win against the New Mexico State Aggies on Thursday night. The ending was a nail-biter, but if he was sweating it was hard to tell because he had been drenched with water by his ecstatic players.

The Lobos picked up a 78-77 win in Las Cruces to improve their record to 5-1 overall while the Aggies dropped to 2-3.

JaQuan Lyle made a basket 12 seconds into the game. Makuach Maluach made a jumper in the same minute, allowing the Lobos to get a quick 4-0 start.

However, the Aggies also got going and by the 17:16 mark they got the lead and kept it for the rest of the half. NMSU entered the break with a 39-37 advantage.

Carlton Bragg opened the second half scoring, but this didn’t mean the Lobos were able to take over. In fact, neither team really did. The lead changed 12 times throughout the game, 11 of those happened during the second period. The Aggies had the largest lead of the second half with five points.

The game stayed close until the end. Vance Jackson, who hasn’t had any real standout performances yet this season, hit his second successful field goal and tied the score at 71-71 when the clock had 4:13 remaining.

With 49 seconds left, Bragg went to the charity line and put the Lobos up by one at 78-77. The Aggies had the ball with 14 seconds left, but they were not able to steal the lead one last time.

Lyle led all scorers with 24 points. He keeps proving that he is not very rusty after sitting out for two years as he continues to be the Lobos’ leading scorer in a roster filled with offensive talent.

“JaQuan Lyle is going to be a problem for most teams he plays all year long,” said New Mexico State head coach Chris Jans. “He has a brilliant skill set, experience, size. The thing about him is his feel. He’s so comfortable on the floor.”

Bragg was the second Lobo who scored in double digits. He collected 14 points, going 5-for-6 from the field. The Aggies had three players scoring double figures with Trevelin Queen’s 23 points leading the team, Ivan Aurrecoechea following with 12 and then Terrell Brown with 10.

Weir said he is feeling good about his team at the moment. He admitted that the program has been struggling for the past few years but that he is hopeful things are turning around.

“Where we are at right now, I feel good as a program,” he said. “We just have to keep building to get our program back to where Lobo fans are accustomed to being.”

Up next, the Lobos will head to New York to take on Auburn on Monday, and either Wisconsin or Richmond on Tuesday as part of the Legends Classic.