The No. 7 New Mexico men’s basketball team earned a ticket to the Mountain West Tournament quarterfinals after a 79-66 victory over the No. 10 San Jose State Spartans on Wednesday.

A nice win for the Lobos, but it didn’t come without some learning. 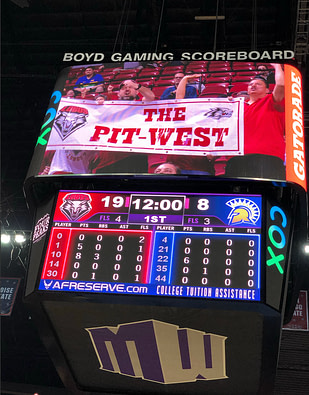 San Jose State had found an 8-4 lead two minutes into the game. This was followed by a dry spell that lasted for nine minutes until the Spartans hit back-to-back three-pointers. By then the Lobos had reached 25 points.

The Lobos controlled much of the game. Makuach Maluach made a three-pointer at the 15:32 mark and then followed up with a layup. The Lobos did not lose the lead after that.

At the break, New Mexico enjoyed a comfortable 45-29 advantage. Three Lobos were seeing double digits with Maluach leading everyone with 14 points. Corey Manigault and Vance Jackson followed with 10 a piece.

A promising first half turned into a disappointing start in the second period. After the first three minutes, New Mexico had already collected five turnovers but no points yet.

Redshirt junior Vance Jackson finally scored at the 15:47 mark. The Lobos were up 47-36, and a shooting foul was called on SJSU’s Omari Moore before the media timeout. Jackson got the extra point there too.

This was just the beginning of the return of “Vegas Vance.” Jackson had scored the last five points for the Lobos in the first half, he then went on to score the first 14 in the second period.

Jackson is known for performing well during postseason, and it’s not exactly a coincidence.

“I don’t like to lose,” he said. “We don’t want to lose. If we lose, the season is over so I’m just trying to do whatever it takes.”

Vance Jackson @VanceJackson1 with his third three-pointer of the day.

He leads all scorers with 16pts. pic.twitter.com/z51abd4aKW

He finished the day leading all scorers with 26 points and 12 rebounds. Behind him were Makuach Maluach and Corey Manigault with 22 and 18 points respectively.

Someone who didn’t get an outstanding amount of points was freshman Kurt Wegscheider. He only registered two points, but his =/- was +22.

Weir said one of the biggest challenges for his staff has been figuring out how to get who he thinks are the best five players of the team to perform well as a group. This is where Wegscheider comes in. While he is only a freshman and his stats are nothing too exciting, Weir said he brings defensive energy and helps move the ball well in the offense.

The Lobos will be facing the No. 2 seed Utah State tomorrow. Last time the two teams played, New Mexico pulled a 66-64 upset at The Pit. Beating a good team twice in a row is tough, so Weir is using what he saw against SJSU to try to make adjustments for the quarterfinals.

The biggest thing the head coach talked about was a clear need for improvement when it comes to taking care of the ball. New Mexico registered 21 turnovers and allowed the Spartans 24 points from them. Meanwhile, UNM only got 10 points from 16 turnovers they forced on San Jose State.

“We gotta find a way to clean that up heading into tomorrow. It was something that we stressed quite a bit. It’s probably the most disappointing thing of tonight,” Weir said. “Outside of that, just I told them today, we just have to win by one. Survive and advance. It’s not all about those numbers. It’s about getting to tomorrow, and right now we are getting to tomorrow.”