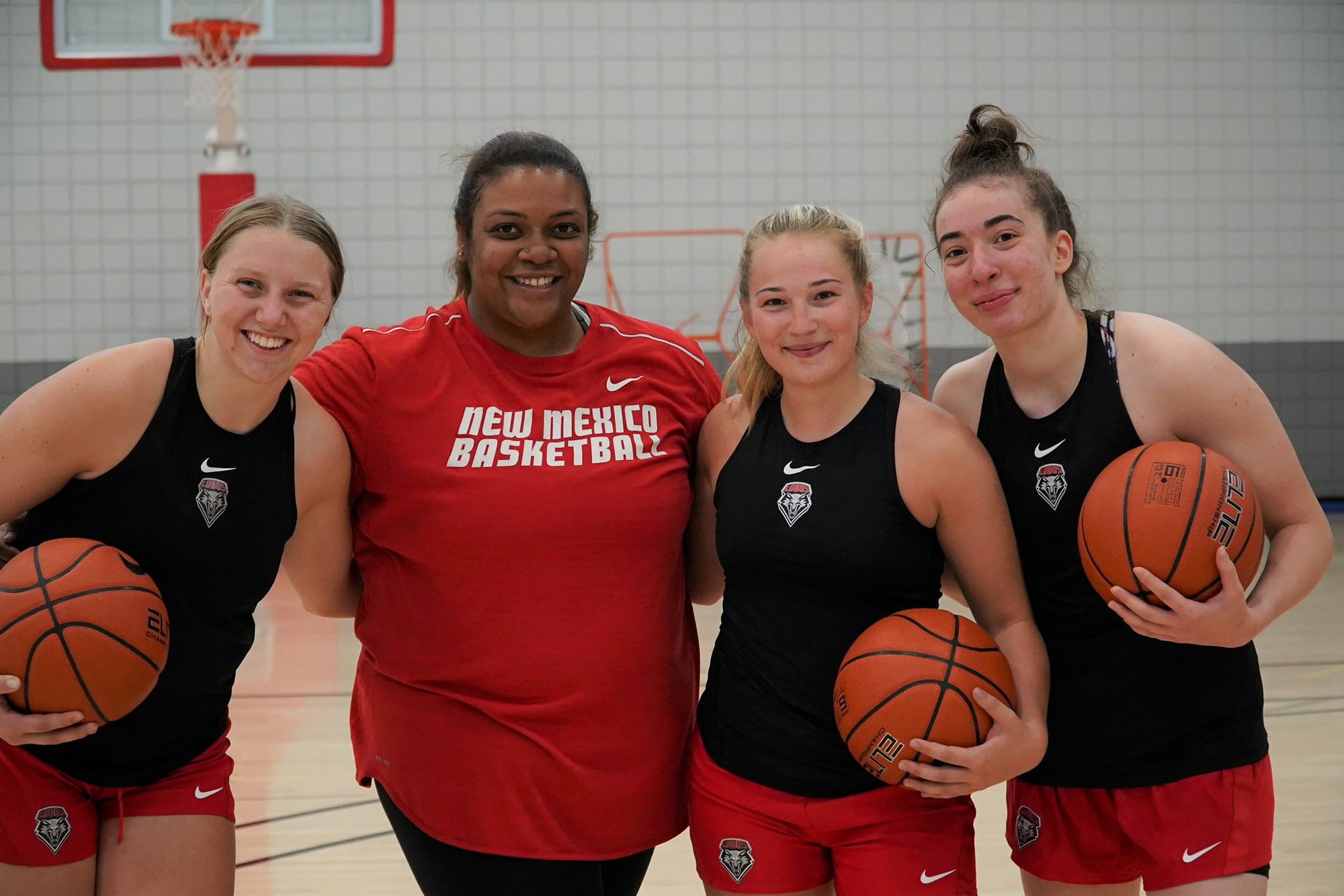 Last season Kabrina was immersed in many of the planning and scheduling and basic team survival that came along with a season on the road.  When the team played a “home game” in Amarillo, she was there keeping things organized and focused.  When the Lobos played two games vs CSU for the regular season title, she was welcoming the fans who showed up to cheer the fans as they entered the Pit.  Now this season, with the departure of Bill Ferrara, Kabrina moves up to be one of the coaches for the 2021/22 season.  As official practice was getting ready to start I was fortunate enough to get a few minutes to talk with her about her move from Indiana and her transition into the coaching fraternity.

Photos are courtesy of UNM Athletics.

Joe:  A belated welcome to New Mexico.  Last year you were hardly here and it certainly wasn’t normal.  Hopefully this year is a little more normal, but we’re not quite there yet.  So, how is the adjustment from Indiana and from living out of a suitcase for a year?

Kabrina: The adjustments from Indiana as a state are very different.  It’s in the mid-west so a lot of grass, a lot of flat plains. So you come out here and the scenery is very different, the mountains, the animals are different there are rocks. I came out here with the dogs so they had to get used to using the restroom on the rocks. Although it’s different, with the coaching staff it felt like home. I’ve known each and every one of them for over ten years. So it was a really cool adjustment.

Joe: You had told a few of us about your connections going back with Mike and others, but for the people who had never heard that, what brought you out here?

Kabrina:  I’ve known Mike for over 25 years. My older sister played for him at The University of Cincinnati. Then she was Assistant Coach at Wright State alongside Val. So I’ve known Mike forever. I was at home teaching, coaching high school basketball, and coaching AAU in the summer.  Coaching kids and training them at a very high level. Mike called me and said he needed somebody who could come out here and connect with the kids. I told my Mom, “I know I went 16 hours away for college and now I’m going 26 hours away for a job. I’m sorry, but coaching college basketball has always been a dream of mine”.  My Dad never coached at the collegiate level but he has coached some of the best players in the world.  My sister coached at the collegiate level for twenty years, so it was fitting that my first job would be with Mike.

Joe:  You might be the same distance that Florida was from Indiana, but this is west of the Mississippi so a lot of the recruiting out here has focused on west of the Mississippi. How do you adjust to a bunch of places and people—and AAU teams and coaches–that you needed very quickly figure out how to connect with?

Kabrina: Absolutely. Well I’ve been fortunate that my Dad coached on the Nike circuit for about 15 years. So I knew a lot of the teams in 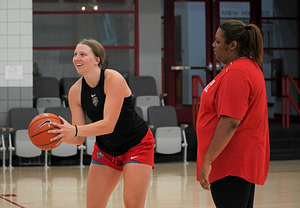 California and some of the ones in Texas. A lot of teams knew my Dad and our name so it was pretty easy. It has been different, you are more comfortable recruiting back home. I do look to the mid-west, but there is the same amount of talent out here. You have to really work hard to get the right kids that will feel at home here.

Joe: What do you see as some of the ways that you can make them feel comfortable?  They are often coming from different situations and circumstances.

Kabrina: For sure.  When I told my family that I wanted to coach in college, they told me that I should major in Psychology.  I decided that that was the best thing for me so that I can learn how to deal with emotional issues and meet people where they are. I think no matter how old the kid is or the other the person is, you need to meet them where they are.  That’s how I’ve been able to connect with our kids and our coaching staff. Even our administrators and other coaches around kids. It’s being what people need you to be for them. Being genuine and being honest are two big values of mine.

Academically, being a teacher and an administrator in a school, the first thing I asked my parents was, “how was your day and how was school?” Those were the first things I wanted to know.  Now I want to know, “Do you have homework?”, “Do you need help or support?”. Whatever it is.  They get on me a lot. They say I’m the Team Mom.

Joe: Being a teacher, I think most people can easily translate some of that skill set into coaching. In some ways it’s just a different subject. You were also an administrator.  How does that translate? What has that done for you that helps you here?

Kabrina: I was taught how to be a leader. I have different–but the same–teaching qualities that a lot of our staff have. Again, meeting people where they are. and also how to hold people accountable. That is what I learned most from being an administrator.  It’s one of my favorite things.  One of my teachers taught me how to figure out what drives people and what motivates them.  That’s how you lead. Everybody is different, but they all have to be held accountable.  That’s what I learned being an administrator and that’s how it’s translating to our athletes and my peers also.

Joe: Your job description has a line that says that you are working mostly with the post players. You only have four folks listed on the roster as post players, but that’s quite a bit of diversity.  You have AT and Shai who are experienced. Nevaeh and Paula who are not. You’ve got some quick posts, some strong posts–some healthy posts, and a recovering AT. That’s a lot of diversity in four players. When you are working individually it’s easy to adjust, but how do you do things when you’re working in a group setting with such diversity among the players?

Kabrina: Player development is one of my favorite things and it’s probably what I’m going to hinge my career on. It’s the most fun part for me. Having all four players here, I think they bring different things to our team. AT brings a lot of experience. AT’s body has changed from year four to year five.  She will be even quicker and stronger. Shai is always going to be our quick post.  They all bring different things to the table.  It will make us hard to guard down there. What I’m most excited about is that we’ll be so diversified because all four of them are so different. If you go from Shai who is hard to guard because she moves two to three times faster than anybody. Nevaeh is hard to guard because she powers through everyone who tries to guard her. Nevaeh is helping Shai to get stronger. AT can push Nevaeh to be faster. Paula can push them to guard her different moves–she has such a wide skill set being an international player. Those workouts are really fun. I would be unhappy if they all were the same.

Joe: How do you put together each player’s development plan since they are very different, and I assume they have different goals?

Kabrina: That part of the conversation starts with talking about their goals and analyzing what it will take to reach them.  I’m there for the accountability, they’re the ones that will have to do the work.  We all have different goals:  they want to win a championship, they want to give their teammates everything they have.

So as far as a development plan it’s a team effort, starting with Coach Mike and making sure I’m clear about what he wants them to be able to do.  He makes it very clear.  That’s my favorite part about working for him:  everything is honest and open.  He tells me exactly what he needs and I can get right to it.

Joe: Staying on goals but switching to you, what are your goals going forward? I assume you want to be a Head Coach at some time.  What are the things you need to learn, improve, etcetera to get there?

Kabrina: Last year I was in a position where I took care of our student athletes and could hold them accountable, but it was just different. I was more their person than their coach. So being in this role has changed me a little bit.  I can see them in a different state. I am also accountable to them in a different way.  So it’s learning and figuring out what relationships to build and how to build them.

I absolutely do want to be a Head Coach one day. It has been a goal of mine since forever.  I can’t wait to run a program, but I know I have so much to learn.  As I said in the beginning, New Mexico and Coach Bradbury and even Bill last year, this is the best place for me.  I’ve learned so much in the thirteen months I’ve been here. It is incomparable to any other place.  Learning when to push and when not to push. You have to read the kids and figure out what they can give you on certain days and what they can’t, and just make a judgement on the fly.

Joe: The other thing that I would be remiss if I didn’t ask you, I know coaching is a time consuming event.  Have you had some time to get around the state and actually see what’s outside of Albuquerque?

Kabrina: Yes and no.  When I got out here last August, I was in quarantine for four weeks.  As soon as that was up, I drove towards Gallup, to Ice Cave and a volcano. I went on a hike.  I’m just fascinated with the scenery and the mountains. I think they are absolutely beautiful.  I’ve been way out of Albuquerque as well as enjoying the city.  I’m excited for the Balloon Fiesta. I’m excited to go to my first ballgame today. Everything is lining up to what I want to do. I want to meet some people and have some friends outside of our offices. Being on a regular schedule and not having to live out of a suitcase will make that a much easier feat and be able to get out and around and see some things.

Joe: I appreciate your taking the time to do this. Hopefully we will continue to not be locked down and we’ll be able to see you guys in The Pit quite soon.

Kabrina:  Thank you Joe. I appreciate it.