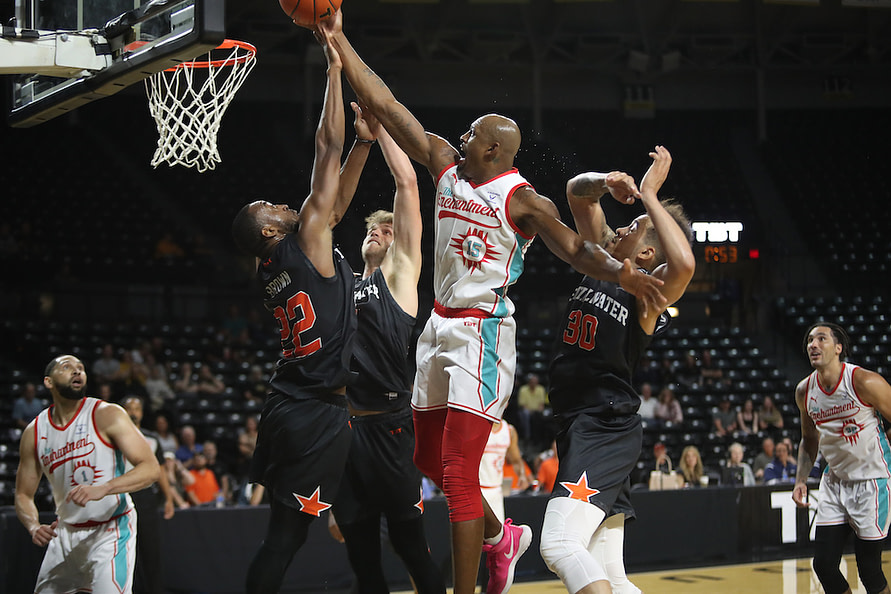 The Enchantment’s journey in The Basketball Tournament was fun but short lived.

Although the New Mexico alumni dominated for most of Saturday’s game, the team missed out from advancing to the second round after an 84-83 loss to The Stillwater Stars, a team made up of Oklahoma State alumni.

Tough ending .Great experience. My favorite part was being able to really bond with some really good basketball players that played at New Mexico and made the program what it was I learned more about the culture this last week more than anything That was enough for me ! #GoLobos

S/o to everyone who played a part in making @Enchantment_TBT happen. Even tho it didn’t end how we wanted it was a great experience. It was good linking with all the former lobos. Big s/o to @coach_bmase for putting it together.

The first three quarters showcased the depth and talent of The Enchantment. The last one… not so much.

By halftime, the team had made 60.6% of their shots, including 42.9% from beyond the arc. J.R. Giddens led them with 11 points going 4-of-5 from the field and 2-2 in three pointers. Commentators said it was clear he still had it and that at 36 years old he looked younger than ever.

Anthony Mathis, who will be joining the San Antonio Spurs in the 2021 Summer League, was also 4-of-5 from the field after two quarters. He showed his versatility in the offense and was right behind Giddens with 9 points. Drew Gordon had eight points by making four of six attempts. Darington Hobson was playing hard and led the team with six rebounds. So many pieces were coming together, which allowed The Enchantment to enter the break with a 51-39 lead.

Anthony Mathis is getting whatever he wants out there on the court! 🔥

The Enchantment continued dominating in the third quarter, and with 53 seconds still left in that period they had a commanding lead of 72-49. That 23-point advantage was the largest one of the game for either team. But the biggest takeaway is that no lead is safe, especially in TBT with the Elam Ending.

Here is a quick explanation: The Elam Ending is done so the game has to end with a made basket. At the first under-four minute stoppage in the last quarter, the game clock is turned off and a target score is announced. It is established by adding eight points to the leading team’s score, and the first team to reach it wins.

On Saturday, the target score was 84. Unfortunately, the Enchantment wasn’t getting it done in the offense anymore. They were only able to put up four points in the first five minutes of the fourth quarter. Meanwhile, the Oklahoma State alumni found themselves in complete control and in the middle of an impressive comeback.

The Stillwater Stars were only shooting at 33.3% during the third quarter but they went up to 66.7% in that final period. The Enchantment found it hard to get stops and probably could have benefited from some substitutions and adjustments.

Mathis played less than two minutes in the last period before getting subbed out, he didn’t come back in until the Elam Ending started. When he came subbed in again, he first missed a jumper in the paint but then made a three pointer. That was the last field goal The Enchantment would see for the rest of the game. The last two points were free throws by Giddens.

The game ended after Giddens missed a jumper in the paint and Stillwater Stars’ Markel Brown grabbed the rebound. He passed it to Brandon Averette, who then sent it to Jeffrey Carroll for the winning dunk.

The Stillwater Stars will take on No. 1 seed Eberlein Drive on Sunday. As for The Enchantment, New Mexico might be returning to TBT next year.

We came up short tonight lobo nation thanx for all your support !! I left it all out there !!

S/o to everyone who played a part in making @Enchantment_TBT happen. Even tho it didn’t end how we wanted it was a great experience. It was good linking with all the former lobos. Big s/o to @coach_bmase for putting it together.