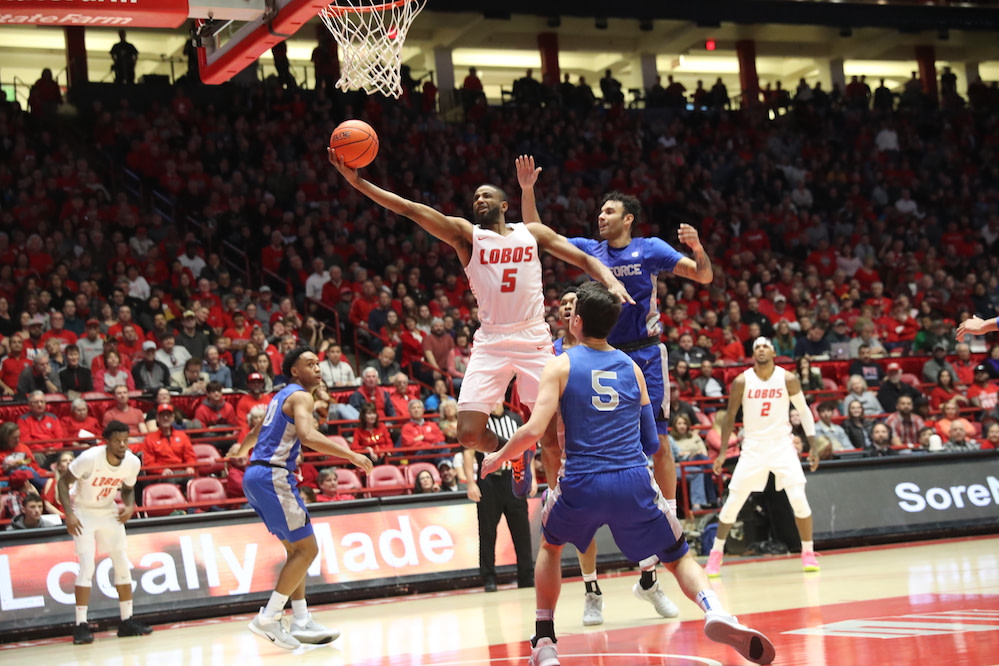 When a team doesn’t score in the last five minutes of a game, it’s hard to get a victory. The Lobos learned that lesson on Wednesday night as they were handed a 60-58 loss by the Air Force Falcons.

New Mexico will officially finish the 2020 regular season with only three wins in games away from Albuquerque.

The Lobo offense started Wednesday night very cold. Halfway through the first period, the Lobos found themselves going 4-for-14 from the field. This made it easy for the Falcons to get as much as a 13-point lead. The home team held a double-digit advantage for most of the first period, but things eventually turned around.

Redshirt junior Vance Jackson hit a layup that tied the game 28-28 with under three minutes remaining. Redshirt senior JaQuan Lyle got a steal and then a dunk to give the Lobos the lead. He went on to hit a three-pointer and give the Lobos a 33-28 advantage at the break.

The second half started out poorly for both teams, but the game was close. In total, the night saw four ties and seven lead changes.

New Mexico’s largest lead was six points with five minutes remaining. But at the 1:08 mark, Sid Tomes hit a three-pointer and the Falcons’ deficit had been cut to one point. Tomes hit another one and his team was up by two.

He didn’t score during the first 20-minute period, but Tomes showed up when it mattered and got seven of the last eight points for Air Force. Meanwhile, the Lobo offense didn’t register any after the clock showed 5:04 remaining.

Wednesday was the last home game for the Falcons. The seniors played accordingly with each of the four senior starters scoring in double figures. In fact, 57 of Air Force’s 60 points came from them. Lavelle Scottie led the winning team with 16 points going 7-for-13 from the field.

Lyle had a game-high of 18 points, while also collecting eight rebounds and six assists. Jackson was the only other Lobo seeing double figures, with 16 points on 5-for-15 shooting.

Up next, the Lobos return to Albuquerque for their last game of the regular season on Saturday. New Mexico will host Utah State at 8pm MT and celebrate Senior Night before tipoff.