Season is over, but men's soccer confusion continues

While the University of New Mexico men’s soccer team is officially set to be discontinued on July 1, 2019, things began falling apart much sooner than that.
The team ended its season after losing 4-0 to Old Dominion during the first round of the Conference USA Tournament on Nov. 7. The Lobos finished the year with a 4-12-1 overall record, the worst since Jeremy Fishbein became head coach in 2002.
In 2001, Fishbein was the associate head coach under Klaus Weber. The record that year was 7-12-2. Weber retired in the summer of 2002, which is when Fishbein took over. During his first year as head coach, Fishbein got the Lobos a 18-4-0 mark.
There was no special press conference scheduled for the end of the 2018 season other than the weekly media luncheon that coaches from different sports share. On Nov. 13, Fishbein was given his normal 10 minutes but he asked what the rush was and pointed out football head coach Bob Davie wasn’t at the press conference yet. He was then allowed to stay for longer. 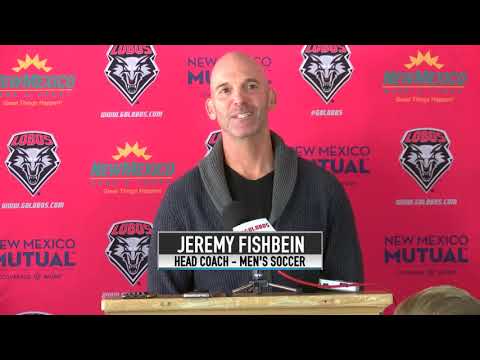 Players were able to start registering in a new NCAA transfer data base in October while the fall season was still going on. The UNM coaching staff met with the players on Nov. 13 and began individual meetings the following day.
The team was told they would not be allowed to have a spring season, which made quite a few people upset because this broke a verbal contract that parents and players had with the program. Fishbein said he’s had parents complain already and although he is not the one who made that decision, he feels he needs to take responsibility because he’s the one who gave them his word.
The coach said it was unfortunate that the Lobos had those spring months taken away because he believes offseason is the time for players to grow since they have to put in the work without the “bright lights and the crowd.” The coaching staff will still be paid through the spring, even if they don’t hold practices.
“I think quite a few players will feel they have to leave after the semester if there’s not a spring,” Fishbein said. “I’m not really sure why there isn’t a winter and spring season. That’s what we promise players in the recruiting process, that they are going to be supported for an entire year.”
Players were told their scholarships would be honored until graduation, but those who are serious about their sport aren’t likely to want to graduate as Lobos. The fall semester at UNM officially ends on Dec. 15, which means players could be leaving before the upcoming legislative session in which New Mexico House Democrats said they would discuss options to help reinstate the program. During her campaign, Governor-elect Michelle Lujan Grisham said she would work to save the sport.
Last week, House Democrats reaffirmed their commitment.
“Before any more major decisions are made, we want UNM to know that we will help, and that keeping the UNM Men’s Soccer program is important to our whole state,” said House Appropriations and Finance Chair Patricia Lundstrom. “Coming together and working with us to find a solution for our state will benefit everyone.”
While he was perhaps happy to hear about the politicians support, Fishbein didn’t want to assume this would fix everything since he understood this was not a simple issue to solve.
“I don’t know enough about politics. There’s a lot of issues within a university that require additional funding,” Fishbein said. “We are not the only people who feel underfunded, the athletic department. There’s other people on campus. I can’t say one is more important than the other. That’s not fair for me to say.”
When the coach was asked if he believed this was the end of Lobo soccer, he said he had to operate believing there’s going to be a program. Prior to this year, he hadn’t been too involved in social media but has been more active this season.

Below is my tweet from July 21st….I still feel the same way…. https://t.co/4McqfcR8Sc

Throughout the season, the coach told the media about how hard it was to constantly be reminded about the program being cut. But at the same time, he followed the news closely and shared them on Twitter, including a piece in the Albuquerque Journal that said the analysis used to make the decision to discontinue sports was flawed.
Fishbein said he didn’t want to put all the blame on those who made the decision to cut his program, saying he understood they had a lot on their plate and he can’t judge how others respond during challenging situations.
When Fishbein was asked about his own future if the program isn’t reinstated, he didn’t give many details on who has expressed interest in him. Instead, he called New Mexico his home and talked about his daughters going to high school and his wife working for the public school system.
Sure he is hurting right now, but Fishbein said his focus is to help his players as best as he can during this difficult time.
“You’re coming to work for 18 years and you just assume that things continue. Probably not the case,” he said. “But I’m proud of our guys. They’re, ‘confused’ is the word, I think. There’s just a ton of uncertainty.”