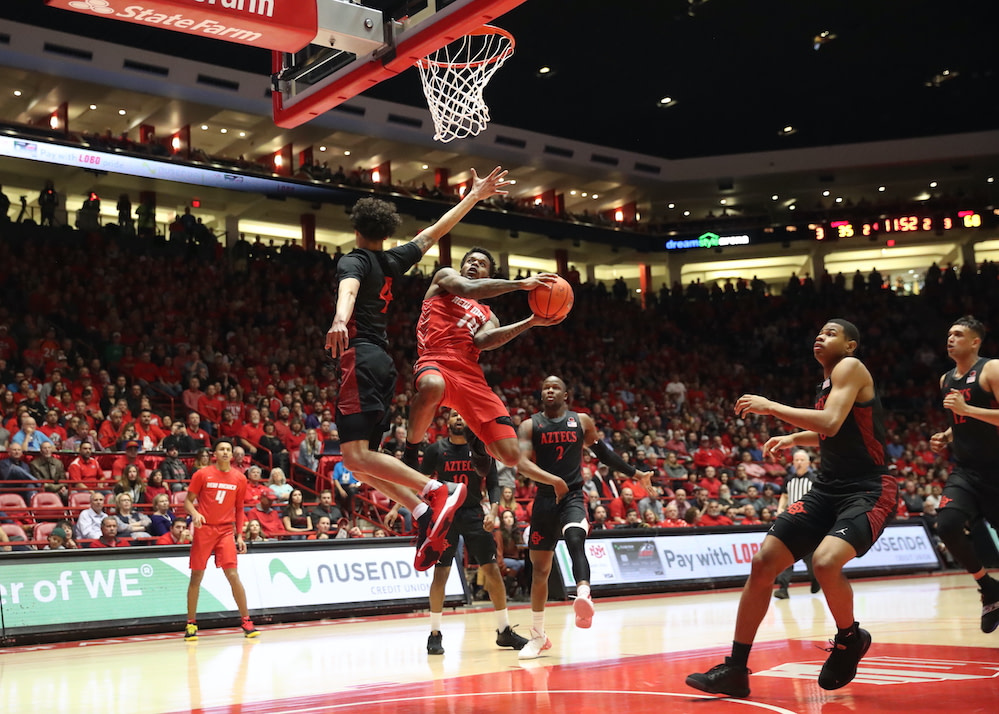 A decent start and a two-point game took a turn in the second half, resulting in a blowout road loss for the New Mexico Lobos. The No. 4 San Diego State Aztecs not only got an 82-59 victory, they also secured the Mountain West regular season title on Tuesday night.

“To have the title outright already with four games to play is an incredible accomplishment. I told them in the locker room now we have to get greedy and try to win them all,” said SDSU head coach Brian Dutcher. “It won’t be easy. Now that we have the title, we have another goal, that goal being to have a perfect season.”

The Lobos were able to find a 10-5 lead at the 17:00 mark after a Corey Manigault dunk. It was an exciting moment for New Mexico, but Manigault got a technical for taunting. The senior picked up his third foul with under five minutes left in the first half. He would eventually be ejected with a second technical with 5:20 remaining in the game

When the clock read 12:43, SDSU had tied the game. Both teams struggled to take care of the ball and find a good rhythm for a while. Malachi Flynn, SDSU’s leading scorer, went 1-for-8 from the field in the first half. As a whole, the Aztecs were shooting at 39.4%. The Lobo were shooting better at 45.2%. The teams went back and forth during the first period and the Aztecs only managed a two-point lead of 35-33.

During their first meeting this season, New Mexico had lost control right away. A close game at halftime was a welcomed sight for the Lobos. However, the Aztecs made the necessary adjustments during the break and took over during the second period.

UNM got outshot 47-26 during the last 20-minutes of the game. Saying the Lobos struggled with scoring during the second half is an understatement as they shot at 26.5% from the field, 9-for-34. They were not able to find a lead or tie the game again. By the 12:35 mark, SDSU was up by double figures and the margin never became a single digit again.

“I thought their defense was exceptional and San Diego State really cranked up in the second half,” said New Mexico head coach Paul Weir. “It might have been a little bit of us fading because we gave so much into that first half. We came out trying to do that in the second half, but they just wear on you.”

Vante Hendrix was the only New Mexico player to score double figures. He led his team with a career-high 20 points.

Four Aztecs saw double digits with Matt Mitchell’s 22 points leading all scorers. Mitchell reached his 1,000th career point on Tuesday, and he also collected 12 rebounds to get his first double-double. To top it all off, he had a dunk shared on the ESPN twitter account.

Up next, New Mexico return to The Pit to host UNLV on Saturday, Feb. 15 at 4pm MT.

A hot second half sends Lobos to the next round of the tournament
MBB Update: April 17 – May 8
Jackson named to MW All-Tournament team
Men's Basketball 357