New Mexico head coach Richard Pitino is getting to work 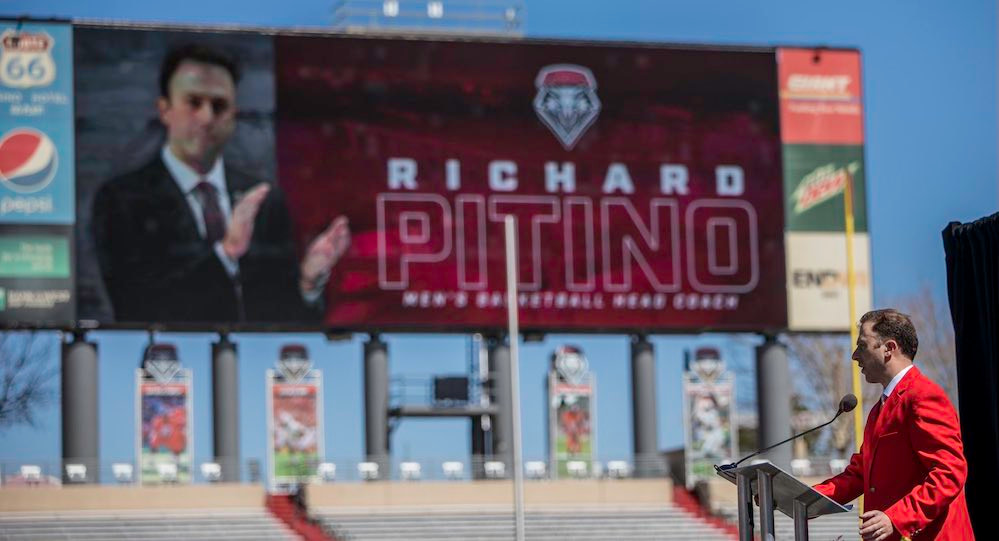 Richard Pitino hasn’t been in New Mexico very long, but he is already committing to embrace the culture that comes with the Lobo men’s basketball program.

During his introductory press conference last week, Pitino said he would wear the traditional cherry blazer and work on giving The Pit a true home advantage feeling again.

“I don’t shy away from what I said. I’m going to win championships,” he said.

After answering questions from the media in front of some fans at University Stadium, Pitino talked to the Lobo men’s basketball players who were in attendance. That talk was a casual introduction that only lasted a few minutes. Fast forward to this Thursday, Pitino has already held two workouts on Monday and Tuesday. He is still getting to know the players, but so far he likes their attitudes.

“The fact that they stayed just shows me their commitment level to this university and to myself,” Pitino said. “They are eager to get to work every single day. You can tell they’ve been through a lot. They weren’t able to be here for most of the year so I think they’re excited about the future. I want to live in the gym, they seem to want to live in the gym.”

The transfer portal situation is interesting across the nation, and the Lobos have their fair share of players exploring their options.

Pitino said he thinks a big reason for so many players in the transfer portal is that they weren’t able to feel connected to their school because of the COVID-19 situation. He knows this is the time for both him and the players to decide if they will be a good fit for each other. One of the most important things, Pitino said, is that he doesn’t want players to feel like he doesn’t want them just because he didn’t recruit them.

It’s a unique situation because the team can’t do all the normal team bonding activities like bowling or going to see a movie, but Pitino said he is going to do his best to get players to know the “real” him. He doesn’t want them to feel like they are “going to the principal’s office” whenever he calls them into his office for a chat. He said the a key for the Lobos to be successful next season will be to take advantage of the spring.

Pitino didn’t give much of an update on the staff situation, all he said is that he is being patient. Will there be some new assistant coaches hired? Likely, but some current ones could stay.

“There are certainly guys on the staff who are really good too and I want to give them a chance as well,” Pitino said.

One of the first calls Pitino got after getting the job came from Gonzales. Pitino admitted that Athletic Director Eddie Nunez kept talking about the football coach during their meeting but he didn’t know much about him yet.

“I’m sitting there going ‘how long has this guy been here?’ I googled quickly, he’s only been here one year. I went to the bathroom to see his background,” Pitino laughed. “But I get it. After meeting him and his unbelievable wife, I get it.”

Pitino is ready to embrace the high expectations Lobo fans have because he loves that passion and support for the program. He said fans have been very welcoming already, just recently someone dropped off a bottle of Bourbon. He was grateful, although he admits that’s not something he drinks.

Pitino: ‘Somebody comes up to me and wants to talk about Lobo bkb, I take that as a blessing.’

He loves talking to people, but don’t expect a response if you reach out through social media.

“I don’t read my mentions on Twitter. I try to stay away from that so that I can be happy in life,” he said, laughing but probably serious, when asked about interacting with the fan base.

The new Lobo coach has been too busy to really keep track of the NCAA Tournament. He doesn’t know the bracket too well but he did share some of his thoughts.

Pitino thinks the Baylor Bears struggled after their COVID-19 issues but still believes they’re a good team. But his pick to win it all? That’s the Gonzaga Bulldogs because of their depth in the offense.