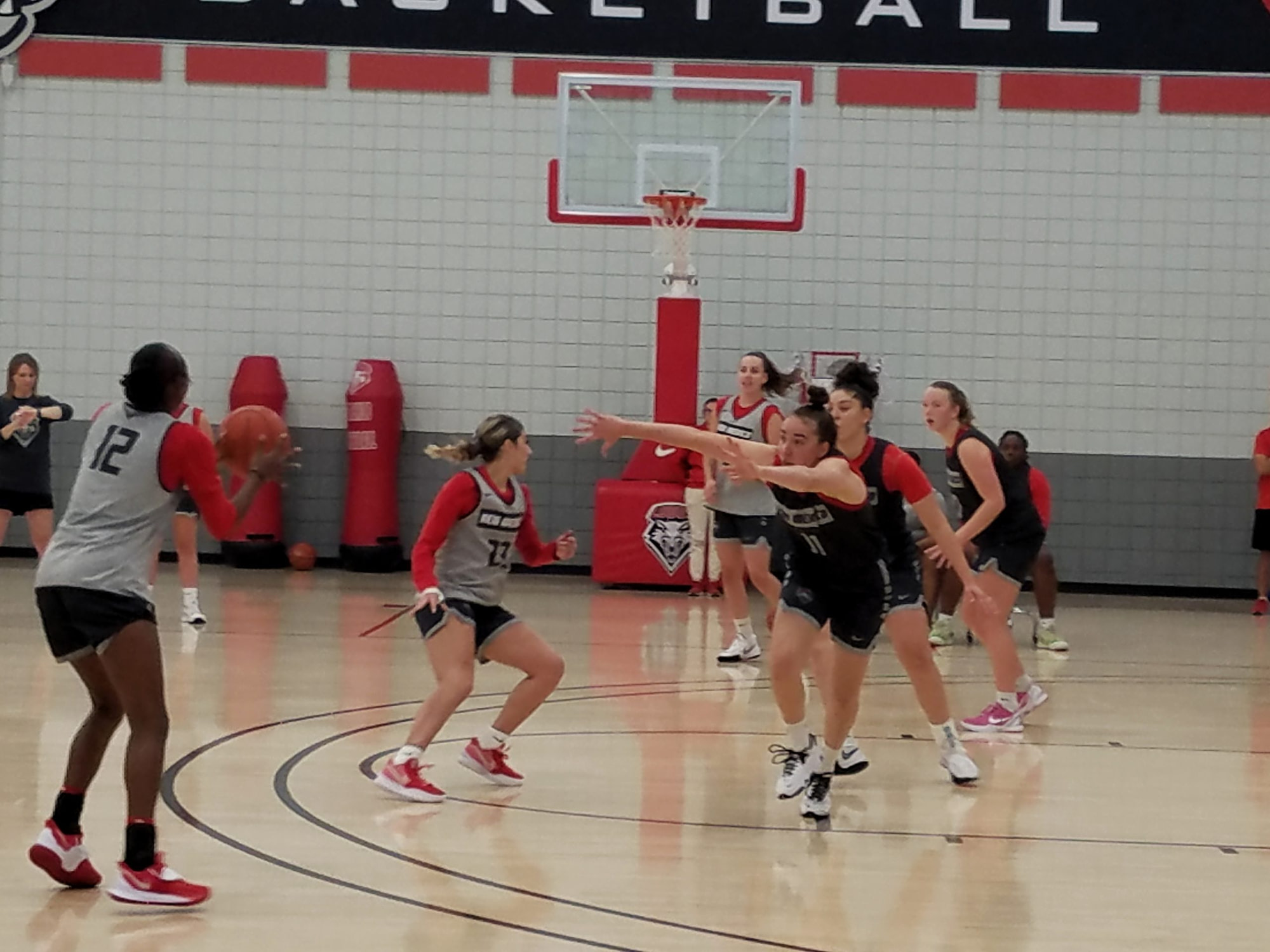 I am always thankful that there are people on this board who know a lot more than I do.  One of the best is a regular poster on the WBB Forum, String Music.  The last few seasons he has been kind enough to do a lot of the legwork to track and compile the team by team changes for the MWC teams, and assess what each one looks to be in 2021/22.  He posted them team by team on the WBB Forum, but here is the consolidated look all in one place.  I will put up the Lobo initial picture in a few days.  Again, much thanks to String.

In the past two seasons, the defending champion has been a prohibitive favorite in the pre-season polls. And in both years, the favorite failed to repeat. Such is the parity in the Mountain West. And this coming season is even harder to predict. There are at least eight teams that could potentially win the regular season championship. And perhaps more than eight could win the tournament just as #7 seed Wyoming won last year’s tournament.

The defending champion, New Mexico, returns five of their top six players. But virtually all of the other contributing players opted to transfer, which leaves the Lobos with an inexperienced bench. Last year’s #2 team, UNLV, on the other hand has strengthened their lineup with two all-conference transfers and the top recruiting class. That makes them a slight favorite with New Mexico, Wyoming, Fresno State, and Nevada close on their heels.

Dark horses Colorado State, San Diego State and Boise State each have holes to fill and questions to answer. But if some new players provide the answers to those questions, they could jump into the mix of contenders.

Looking for an easy, automatic conference win? Don’t count on it, as Air Force has prided itself on being a giant killer the past two seasons and San Jose State and Utah State have shopped the transfer portal for players to make them competitive. Still, they would be long shots to take the title.

Last year UNLV surprised a lot of people by finishing 2nd in the MWC with only two upper-classmen. They return three starters including Freshman-of-the-Year, Desi-Rae Young. And they picked up two more transfer starters with all-conference credentials. Former all-MWC player Essence Booker (from Ball State) should be able to take over the point position left by two-time Defensive Player of the Year, Bailey Thomas. And Horizon Conference Freshman of the Year, Nneka Obiazor, and Arizona Gatorade Player of the Year, Alyssa Brown, will offset the loss of three forwards who transferred out. Although the Rebels are still young, they have all the pieces and depth at all five positions to be the favorite.

Despite spending almost the entire season on the road due to the state shutdown and facing two separate week-long quarantines, UNM just kept winning games to take the regular season MWC championship. They return five of their top six players, all seniors. But there is a bit of uncertainty because three of them, including all-conference 5th-year seniors Jaedyn de la Cerda and Antonia Anderson, had off-season surgery. The Lobos are one of the top shooting teams in the conference. But lack of rebounding continues to be a concern. To repeat, they will need their young and inexperienced bench to contribute quality minutes that they lost via the transfer portal.

Wyoming had some bad-luck losses to drop to #7 in the MWC in 2021. But they won four games in a row in Vegas to punch their NCAA tournament ticket. They lost two starters, but return everyone else including tournament MVP, Quinn Weidemann. One starting position will likely go to their leading scorer, McKinley Bradshaw, who came off the bench last year. The other starting position is open for a freshman rim protector, 6-4 Allyson Fertig, who lost only two games in her entire high school career. If she is even half as dominating in college, the Cowgirls will be a top contender for the next four years.

Last season’s preseason favorite stumbled to 4th place by losing a lot of close games. Then they were upset in the conference tournament final by Wyoming. Several key players transferred out. But team-leading scorers, Haley and Hanna Cavinder, and starting center Wytalla Motta return on a mission to go to the NCAA tournament. They are joined by two experienced transfers, Amiee Book of CS Fullerton and Imani Lacy who began her career at Nevada. The bench is deep and versatile once again, but a bit younger.

Nevada finished the season strong to overtake Boise State for 5th place. With four starters and all-conference point guard, Da’Ja Hamilton, returning, they are ready to compete with anyone in the league. Defense is their calling card, but they added a couple of scoring options to their balanced lineup in transfers Kylie Jimenez and Bethany Carstens. They also added much-needed height in 6-3 freshman center, Natalie Lathrop, to back up Megan Ormiston. In short, they are experienced and primed to take the next step from competitive to contending.

Colorado State led the MWC for most of the 2021 season before injuries contributed to a disappointing finish with four straight losses. They return their floor general and MWC Newcomer of the Year, McKenna Hofschild, and centers Karly Murphy and Cali Clark. All-conference four-year starter, Lore Devos, will likely be replaced by Sydney Mech who missed most of last season with an undisclosed injury or by Fresno State transfer, Kendyll Kinzer. The rest of the subs, transfers, and freshmen will be competing for the two starting wing positions vacated by Williams, Boni, and Bonnarens. The quality of those wings will determine whether CSU is a contender or not.

SDSU is coming off of an injury-plagued year, resulting in another sub-.500 season. But everyone returns except senior point guard, Tea Adams. If last year’s preseason Freshman of the Year, Asia Avinger, and former All-Freshman team member, Mallory Adams, are fully recovered from their ACL injuries, the Aztecs will be loaded with talent. Top scorer, Sophia Ramos, should be one hundred percent after suffering a broken hand in mid-season. The defense has been formidable. But the offense has been plagued with lack of cohesion and turnovers. Solve that and the string of losing seasons could finally come to an end.

After four straight appearances in the NCAA tournament, Boise State faced a rebuilding year last season. And now their top three players are gone as well. Senior Rachel Bowers and a slew of sophomores return to try and turn the program back into the power house of the conference. The tall Broncos excel at rebounding and blocking shots. But their lack of 3-point shooters made it too easy for opponents to pack it in on them. To contend, the Broncos will have to shoot better. Perhaps JUCO All-American, Kaitlin Burgess, can fill that need.

After building a program with young players for several years, 2021 was supposed to be the breakout year. But COVID-19 took a toll on the Falcons after an early positive case temporarily shut them down. Now for the first time in years, Air Force has to replace three starters. However, they return their two leading scorers — all-conference Riley Snyder and point guard Briana Autrey-Thompson. And they have a deep bench to fill in the other starting positions. They have demonstrated their ability to knock off the 1st place team three times in the last two years. But sustained winning continues to be elusive.

The 2021 season was an unmitigated disaster for San Jose State. After being picked #2 in the MWC preseason polls, they lost their star point guard, Azyhiana Basallo, to a season-ending injury. Soon after that they had a COVID pause to the season followed by a county lockdown and the decision to opt out of the season in January. To make matters worse, four starters decided not to return this season. This year’s team is a total rebuild of transfers, freshmen, and a couple of returning subs. Give coach Craighead credit for assembling some quality transfers. But it is anybody’s guess how well they will mesh and compete with the rest of the league.

After a surprising 4-4 start, Utah State lost their final 16 games to finish last in the MWC. In an attempt to jump-start the program, Coach Ard has signed six transfers and not a single freshman. The best of the bunch is Adryana Quezada, who averaged a double-double at UT San Antonio. But several others could also join the starting lineup. While an immediate upgrade in talent and added depth should make the Aggies more competitive, it is not likely that they will go from worst to first in one year. But they will no longer be an easy win for the other MWC teams.