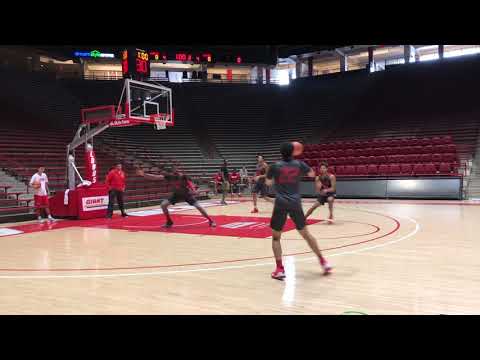 The team started practice in the film room with the guys watching a video about defense. The Lobos then headed to The Pit floor and began with 20 minutes of stretching. After stretching they had three stations. Dan McHale was leading a station focusing on defense, Brandon Mason was leading the shooting/layup station and Jerome Robinson worked on dribbling. It’s common for head coach Paul Weir to allow assistant coaches to take over during summer workouts and practices.
Newcomers present:

Newcomers not present yet:

Although he doesn’t have a lot of restrictions anymore, JaQuan Lyle is still taking it easy through the last few months of recovery from his ruptured Achilles tendon. He was at practice but wasn’t working out fully. The team will have a break a week from Monday. The fall semester starts on Aug.18/19.