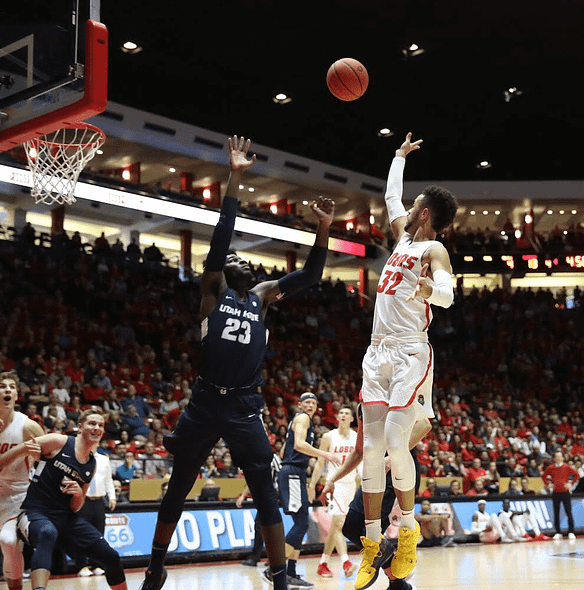 The Lobos lost to Utah State for the second time this season. Skyler Forman/The Lair

After catching up during the second half, New Mexico failed to finish on top during a 68-66 loss to Utah State on Saturday afternoon. A whistle for a backcourt violation increased the drama at the end of the game.

“I don’t want to construe that as that’s the reason we lost,” said New Mexico head coach Paul Weir. “We obviously did a lot of other things. It just sucks for us right now.”

Carlton Bragg scored the first basket of the game but the New Mexico offense couldn’t score again for a while. By the first media timeout of the day at the 15:10 mark, Utah State lead 9-2.

By the 11:41 timeout, Utah State was clearly dominating over the Lobos. The Aggies held a double-digit lead at 17-6. The New Mexico offense struggled as the team was shooting at 15.4 percent from the field.

At halftime, The Aggies held a 36-27 lead. It was not surprising the Lobos were behind, making only eight out of 29 shooting attempts.

Weir said he told his team they were looking inexperienced while in the locker room.

“I’ve had a lot of talks with these guys about playing basketball the right way,” the coach said. “In the first half we just didn’t. On defense, on offense, we just weren’t doing a lot of fundamental things.”

The second period saw improvement with the Lobos shooting at 51.7 percent. Senior Anthony Mathis did not score during the first period, but in this half he saw 16 points including four three-pointers.

Mathis came down after a collision during the last few minutes of the game and got up holding his face but then returned not long after.

Anthony Mathis leaves the court with an injury. pic.twitter.com/ILLUZ3tIqf

The officiating call at the end of the game involved Mathis. The senior was approaching halfcourt and then passed the ball to teammate Vance Jackson. This led to the referees calling a backcourt violation and giving the Aggies the ball.

After the game, the Mountain West released a statement about the call being incorrect.

With Saturday’s result, New Mexico falls into a 9-11 overall record and 3-5 in the conference. This is not where the team wanted to be at this point of the season, but Jackson, who finished the day with 13 points, is keeping a positive attitude.

“We still got a lot of games left this season,” the redshirt sophomore said during the postgame press conference. “I feel very confident that we will get it together.”

Jackson was one of four Lobos who saw double digits. The team was led by Bragg who scored a career-high of 18 points. Meanwhile, the Aggies had two players in double figures, Sam Merrill with 22 points and Brock Miller with 16.

Up next, New Mexico takes on Fresno State next Saturday before hosting San Diego State on Feb. 5.