Bradley Ezewiro’s visit created some buzz in New Mexico, but the Lobo men’s basketball staff also took advantage of the Cherry & Silver weekend to invite nearby talent.
Ezewiro arrived on Friday and was the only one on an official visit. A couple other players showed up on Saturday for unofficial visits. These players included class of 2021 Fedonta “JB” White and Jalen Weaver. The two of them happen to get along pretty well.
“Glad to come see my boy,” White tweeted on Saturday after seeing him at the tailgate and the Cherry & Silver event.
White attends Lobo events often because of how close Santa Fe is from Albuquerque. The New Mexico coaching staff is looking to create relationships with in-state players and therefore likes to see them at events like the one on Saturday. William “Deuce” Benjamin was another one of them. He is a sophomore at Las Cruces High School, where his father William Benjamin is the head coach.
Weaver is not too far away either, as he attends Smoky Hill in Aurora, Colorado. Last season he averaged 11.1 points, 5.6 rebounds and one steal. He currently has four stars on 247 Sports and is ranked #1 in Colorado, 155 nationally. 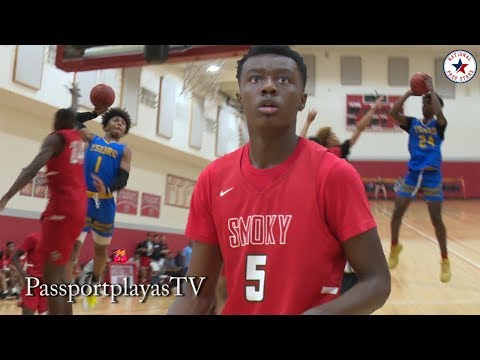 Schools interested in him include UMass, Colorado University and Santa Clara. Weaver’s recruiting is still wide open, but he did say he has a good opinion of the New Mexico basketball environment so far.
“I just really like the energy of the people, they really care about basketball here,” he said. “The stadium is pretty nice.”
Fans are something he pays close attention to. Part of his decision on a school will be based on how much support he feels he will get from the community.
“Loyalty,” he said when asked was he was looking for in a program. “How much the fans care, the energy from the crowd.”
Weaver also knows Javonte Johnson, who attends Cheyenne Mountain in Colorado. He received an offer from New Mexico in June and was in New Mexico for the Cherry & Silver. The class of 2020 guard/forward has received offers from Loyola Marymount University, Cal State Fullerton and Utah Valley University among others.
Lobo Club bus trips to NMSU
MBB Update: Feb. 28
Lobos fall 96-74 against Alford and Neal’s Wolf Pack
Men's Basketball 357