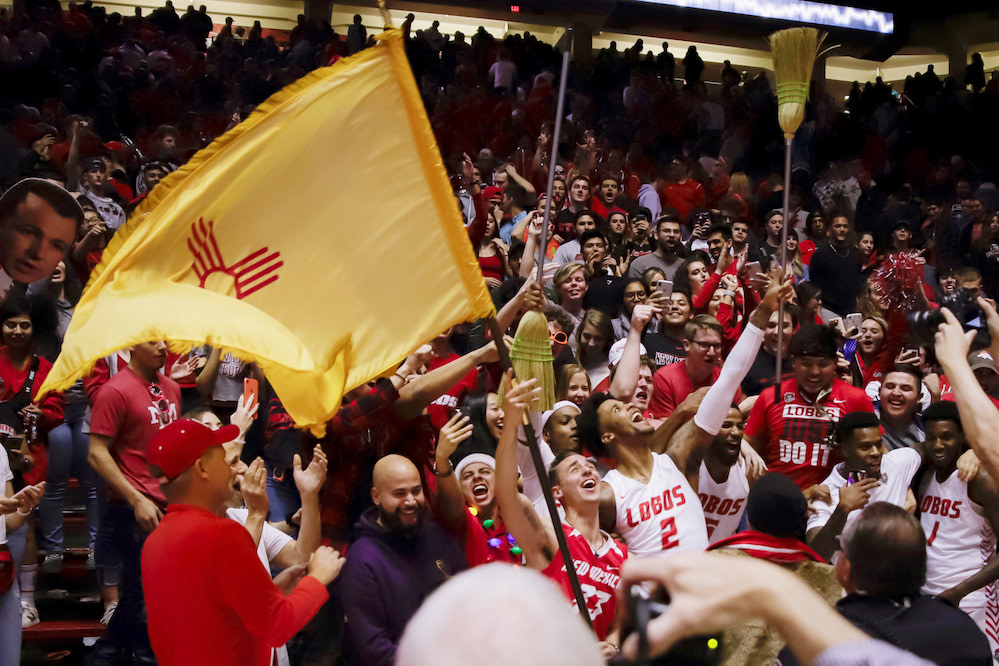 Keith McGee’s skills with a broom might not have left The Pit court clean, but his sweeping did get the New Mexico student section even more pumped for the latest Rio Grande Rivalry victory on Saturday.

The Lobos defeated the New Mexico State Aggies 69-62, which marked the second victory for New Mexico this season against its in-state rival. This was also head coach Paul Weir’s second win against his former team.

Lobo commit Javonte Johnson was in attendance as an announced crowd of 14,488 cheered on the cherry & silver. After the game, his tweet was simple: “the pit was crazy!”

Get the brooms out 🧹 pic.twitter.com/98waWnVOuu

New Mexico took the first lead of the game but NMSU reached double digits first at the 14:32 mark leading 10-6. The Lobos got ahead less than five minutes later after McGee got a rebound and then got assisted by Vance Jackson for a layup. McGee was having a moment as he scored the Lobos first three-pointer of the night a couple minutes later.

The Aggies went back on top with six minutes left and led by as many as seven points. JaQuan Lyle hit the last field goal for the Lobos in this period, a three-pointer that made the score 31-33 before the break.

JJ Caldwell tied the score at 33-33 two minutes into the second half and New Mexico was up for a while. NMSU found the lead with under 12 minutes left, but after another McGee three-pointer the Lobos found a 49-47 lead and stayed on top for the rest of the evening.

While a couple Lobos came up big during some key plays, the guy who had the best night was no doubt Carlton Bragg.

Bragg not only walked in UNM’s Student-Athlete graduation on Friday, he then celebrated his 24th birthday on Saturday. His own present to himself was a double double, his fourth one of the season, of 17 points and 17 rebounds.

“It felt amazing to actually be a part of the win rather than sitting and watching like I did last year,” Bragg said. “This win was amazing and it was definitely one of the best games I’ve ever played in.”

Up next, the Lobos are in the middle of a four-game home stretch. They will host Grand Canyon University on Tuesday at 7pm.