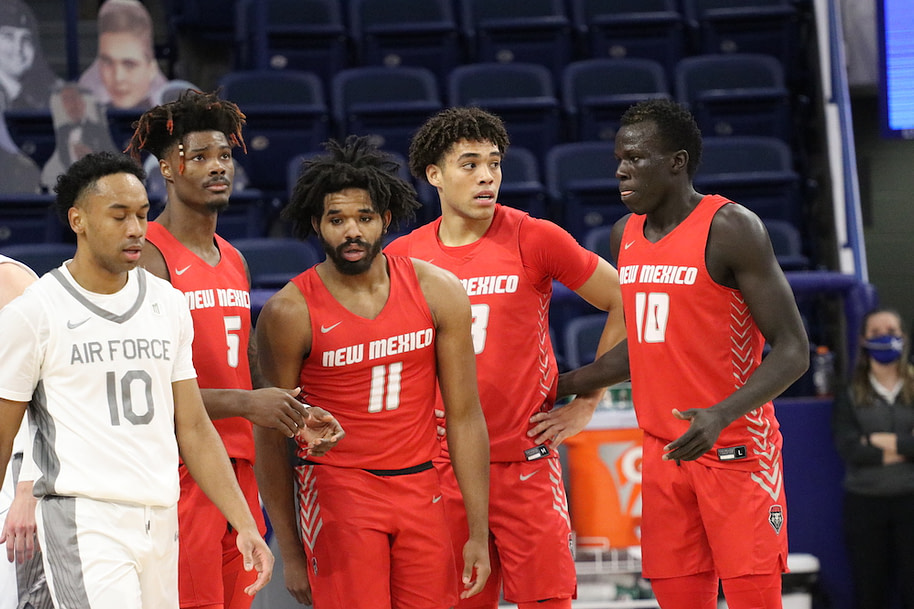 The New Mexico men’s basketball team, on paper, showed potential on a couple different areas before the season started. But with just one game remaining in the regular season, only senior Makuach Maluach has been consistent.

“That’s been a little bit of our season, it’s kind of been one step forward and two steps back… It just feels like we’ve never been able to consistently get anything going,” said Lobo head coach Paul Weir.

Wednesday’s game started with a turnover on the tip because of an over-and-back violation. The ball went into the front court, Bayron Matos had it and sent it to Saquan Singleton who was leaving the backcourt.

“Unfortunately we had a lot of those. The double dribble on the rebound, stepping out of bounds when you’re open,” Weir said. “We did a lot of those inexperienced plays that you hope we’ve kind of pushed through but just not quite there.”

Weir said he doesn’t think it is a lack of effort from his players, but he thinks it means their youth and inexperience is still showing.

The Lobos found themselves down by as many as 16 points in the first period. They caught up in the second period but their biggest lead was only two points with 12:04 remaining.

“Obviously tonight we didn’t start well and it kinda hurt us,” Maluach said. “It’s hard when you come in and not start well and now you have to fight your way through the whole game.”

Maluach was the only player to score in double digits for New Mexico on Wednesday. He scored 20 points, which became his third straight game scoring 20+. The senior averages 15.65 points and also leads in rebounds with 6.10 per game.

New Mexico has one more game on their regular season schedule before heading to Las Vegas for the Mountain West Tournament. The Lobos will face Colorado State on March 3, a make-up game meant to replace the series that was supposed to be played on Feb. 9 and 11.