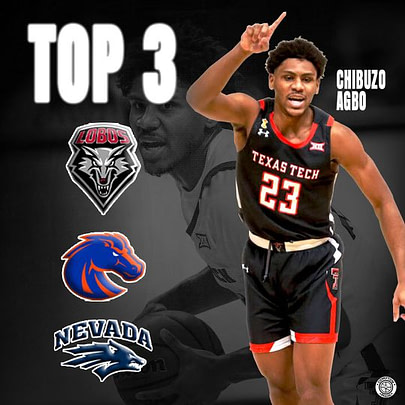 Texas Tech transfer Chibuzo Agbo announced his Top 3 schools on Monday through a social media post. The New Mexico Lobos made the list along with Boise State, and Nevada.

The 6’7″ guard spent two seasons with the Red Raiders before entering the transfer portal. He registered a career-high eight points on March 18 when Texas Tech took on Montana State in the first round of the NCAA Tournament.

Mark Adams speaks about Chibuzo Agbo after the hometown kid knocked down a few shots at the end today's game. pic.twitter.com/CZBdsfUkp1

That game was played in San Diego, which is Agbo’s hometown. Head coach Mark Adams said he was not surprised at Agbo’s performance. Adams said he can play well on both sides of the floor and that he is one of the best three-point shooters for the team.

Before his college career, Agbo averaged 22 points per game through his senior season at Saint Augustine High School in San Diego.