New Mexico looks to bounce back with game against SJSU 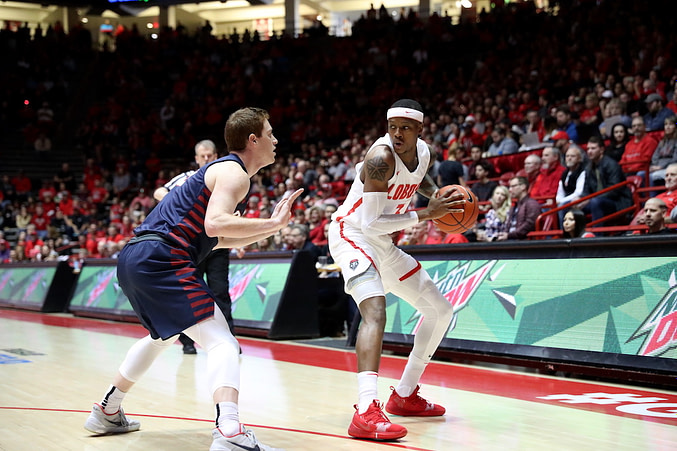 After a blowout loss to the No. 6 Nevada, the Lobos are looking to bounce back on Wednesday as they host the San Jose State Spartans for a 7pm match.

The remaining of New Mexico’s conference schedule should be less challenging as the Lobos have already faced Nevada twice, and they are the only team in the Mountain West that has two games left against the last-place Spartans.

San Jose State
The Spartans are in last place in the conference with a 3-19 overall record and 0-10 in the Mountain West. Their last result was a 57-105 loss to Boise State. This was their 13th straight loss.

SJSU showed some potential during its non-conference schedule with relatively close losses to Stanford (78-73) and California 88-80.

New Mexico head coach Paul Weir talked about the Spartans’ height and the importance of keeping them off the glass on Wednesday. However, the coach said he is also focusing on his team improving overall. Rebounding will be a big focus during practice this week.

Mathis leads the Lobos in scoring, averaging 15.3 points per game. He is a player that opposite teams give extra attention. Nevada head coach Eric Musselman said his players focused on guarding him when the Wolf Pack defeated UNM 91-62 last Saturday.

Mathis played a little bit of air guitar after hitting a three-pointer, he has three so far. pic.twitter.com/HGAyXIpgYo

However, whether Mathis is available for Wednesday is yet to be seen. He got a bruised tailbone during a practice early last week before the San Diego State game. While the medical staff said sitting out wouldn’t really impact his recovery, Weir said he would feel more comfortable resting him while he gets back to 100 percent.

Point guard opportunities
Mathis sitting out gives an opportunity for the team’s other two point guards to prove themselves. Redshirt sophomore Keith McGee led the team last Tuesday with 19 points against San Diego State. Freshman Drue Drinnon was back from a concussion and recorded eight points. Weir was impressed with his performance and said that was the best he had seen Drinnon play as a Lobo.

Shooting percentage
During their 68-66 loss to Utah State on Jan. 26, the Lobos shot at 27.59 percent during the first period. With their 70-82 loss to Fresno State, New Mexico shoot at 31.9 percent. The Lobos had a good game against SDSU shooting over 50 percent, but struggled once again when they played Nevada with a 33.3 percentage.

“This isn’t the begining of the year or a rough patch in the middle.” Weir said. “This is more of a season thing…. Realistically when you look at our numbers now, we gotta do something more.”

Lobos look to bounce back in LA
Weir feeling pressure, but support is still there
Aggies hand Lobos their first home loss of the season in overtime
Men's Basketball 357