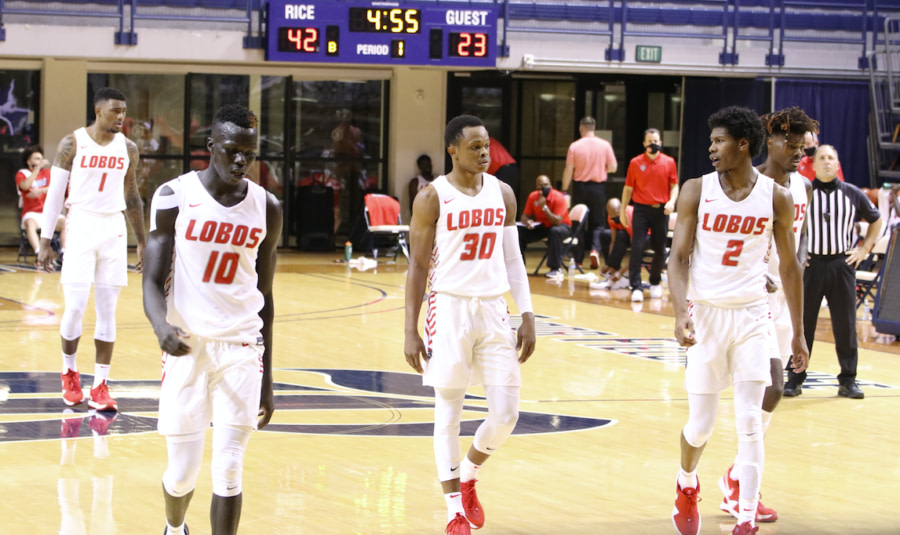 They didn’t face the most-well known opponent, but the New Mexico Lobos are 2-0 after a 104-65 win over Our Lady of the Lake, an NAIA team, on Tuesday evening.

The cherry and silver is using this week to prepare for their conference opener against Boise State on Dec. 21. The team showed improvement against the OLLU Saints, but there are still more adjustments that New Mexico head coach Paul Weir wants to make. Three-point defense is not one them.

The Rice Owls made 13 three-pointers against the Lobos on Sunday, the Saints made 10 on Tuesday. Weir said he wasn’t expecting OLLU to make many because that’s not what that team usually does. When he saw they were actually making them, he said his goal was to have the Lobos challenge them but not necessarily stop them. Weir is focusing on controlling the paint, which is a similar mentality from last season.

“It’s obviously not ideal to be giving up threes the way we do, but the idea is to keep teams out of the paint, stay out of foul trouble as best we can and make teams make shots over the top of our length,” the coach explained.

UNM shot at 43.5% from beyond the arc on Tuesday, also scoring 10 three-pointers. Starting point guard Jeremiah Francis attempted seven but only made one. On Sunday he attempted four but made none of them. Francis is clearly struggling in that area, but Weir is not going to discourage him from taking them.

“He shot it very well, he’s unfortunately taking them three feet behind the line right now, so I think we just have to get him a little bit more comfortable,” Weir said. “If he just catches and shoots, he has a beautiful shot. I think he’ll be a great three-point shooter for us, but I think tonight he just forced some ones that brought his percentage down.”

Makuach Maluach once again led his team in offense, this time with 17 points while shooting 60% from the field, including two three-pointers. He was cold at the charity line, only making three out of his eight free throw attempts. The senior is only one point shy of reaching 1,000 career points.

New Mexico as a whole saw improvement in the offense. On Sunday the Lobos shot at 43.9% from the field, that percentage improved to 59.7% on Tuesday. A couple Lobos shot at 100%, including Rod Brown (6-6) and Valdir Manuel (5-5) who scored 16 and 11 points respectively.

Freshman Javonte Johnson scored seven points going 3-of-3, but his offense was not what Weir was paying attention to.

“Javonte did make a few defensive miscues early in the game. He’s just got to keep learning and growing so we can put him out there and feel good about it,” Weir said. “He missed some block outs as well. The scoring is what everybody sees, but most of our coaching and emphasis right now is going to be on defense and rebounding.”

The Lobos checked in 16 players on Tuesday, although four of them registered four or less minutes. Those who checked in included five who were seeing the floor for the first time wearing the New Mexico jersey: sophomore Logan Padgett, redshirt-freshman Daniel Headdings and freshmen Isaiah Marin, Nolan Dorsey and Eloy Medina.

I really checked in my first D1 game as a lobo.. thank you god ima be patient..❤️

Up next, the Lobos will take on the LeTourneau Yellowjackets on Thursday, Dec. 17 at 2:30pm MT. The game will be streamed on YouTube.