New Mexico Lobos get first win of the season, Isaiah Chavez as QB 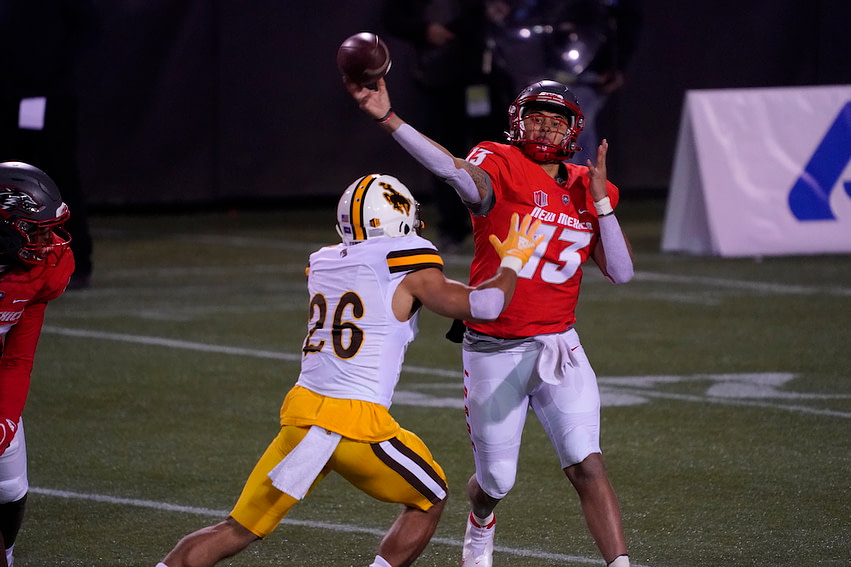 Freshman quarterback Isaiah Chavez gets on the field against Wyoming after Connor Genal breaks wrist. Photo by Lucas Peltier

The New Mexico Lobos were on a 14-game losing streak, and had also lost 20 straight Mountain West games coming into the weekend. They came into Saturday’s game as the team with the longest active losing streak in the nation.

“That’s not us anymore,” said head coach Danny Gonzales after getting a Gatorade shower.

The Lobos pulled an improbably 17-16 win over the Wyoming Cowboys after losing their fourth string quarterback to a broken wrist during the game and having to rely on fifth string quarterback Isaiah Chavez, who is a true freshman and a walk-on. This victory became the first win for the Lobos with Gonzales as the head coach.

The game was a “home” game for the Lobos, which in 2020 means it was played at Sam Boyd Stadium in Las Vegas, Nevada. But the “home field” advantage was not enough for them to avoid being a 17.5 point underdog. It wasn’t shocking to see that spread, as the Lobos have been struggling in both the defensive and offensive end, while Wyoming was entering the game fresh off a 45-14 victory over UNLV.

Saturday’s game was closer that expected. Chavez injected energy into his team when he threw a 44-yard touchdown pass to a wide open Bobby Cole with 6:22 left on the clock. With three minutes left on the clock, Wyoming had driven inside the UNM 5-yard line but a fumble sealed the Cowboys’ faith.

Earlier this week, I asked New Mexico freshman QB Isaiah Chavez about advice the older quarterbacks have given him.