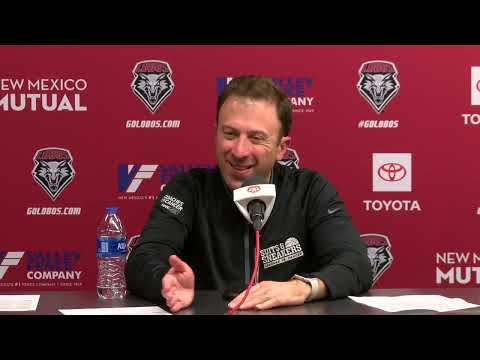 The New Mexico Lobos registered their first conference win of the season with an 86-70 home victory against the San Josè State Spartans on Friday night.

Both teams are in their first year of rebuilding with new head coaches, and both have struggled during Mountain West play.

“When you take over a new job, you have to have perspective and you have to understand what the situation is,” said New Mexico head coach Richard Pitino. “As badly as I want to get this arena filled again, be at the top of the Mountain West, it’s going to take time. We are showing growth.”

The Lobos lost to Fresno State on Tuesday after falling behind early, but they came out as the stronger team on Friday.

New Mexico took an early 9-0 lead that forced San Josè State to call a 30-second timeout. The Spartans took three minutes to score, but when they did, it was back-to-back baskets. New Mexico freshman center Sebastian Forsling soon disrupted their momentum with a dunk.

Good ball movement for the Lobos. New Mexico leads 24-11 with 12 minutes left in the first half. pic.twitter.com/YFBccd8wBu

New Mexico was up by as many as 17 points in the first period. The Spartans didn’t go away, but the Lobos still entered halftime with a 43-32 advantage.

San Josè State started the second period without missing a shot in the first four minutes. The Lobos lost their double-digit lead but regained it right away. With two minutes left in the game, the home team had an 18-point lead.

“The thing that our guys have done with so many dramatic, kind of devastating close losses, they’ve stayed confident, they’ve stayed positive,” Pitino said. “The locker room has never wavered. I think they see the big picture.”