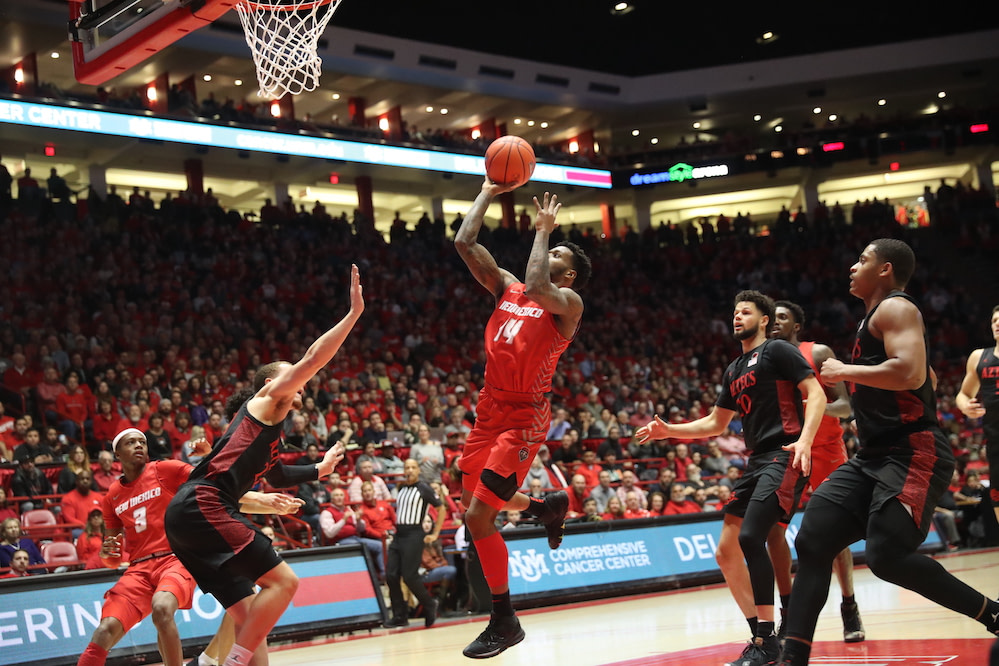 New Mexico gets another chance at San Diego State

New Mexico gets a second chance at defeating the 24-0 San Diego State Aztecs on Tuesday night. It won’t be any easier as the No. 4 Aztecs will be enjoying home court advantage.

When the Aztecs visited The Pit on Jan. 29, they walked away with an 85-57 victory. Five SDSU players were seeing double digits. The Lobos limited Malachi Flynn, the Aztecs leading scorer, to only two points during the first period. Flynn scored 10 during the second. His 12 points were not the most from his team, but he did lead in rebounds with six.

This,  SDSU head coach Brian Dutcher explained, is the key to making his team more difficult to guard.

“We shared the ball, 23 assists, we played the right way and we were rewarded for it. Malachi is the perfect example. He could’ve run out there and maybe score 20 or 30 points. But he didn’t care, he just moved the ball. Effortless basketball, he set the tone.”

“Once you get your best players playing that way, everybody else buys in. It’s contagious.” pic.twitter.com/wroBnKaKtP

SDSU was shooting at 58.2% from the field, while the New Mexico offense shot at 33.8%. The Aztecs also achieved a season-high 15 three-pointers.

During that first meeting, New Mexico did not count with it’s leading scorer JaQuan Lyle as he was serving a two-game suspension. The team got him back this past weekend against Wyoming. He did not have his best night of the season, going 2-for-10 from the field.

Vance Jackson, who was out with an injury, made his return too. He scored 20 points and tied a season high of six three-pointers.

The leading scorer against Wyoming was Corey Manigault with 28 points and nine rebounds. Zane Martin and Keith McGee also saw double digits with 23 and 13 points respectively. If the Lobos can perform in a similar way and get Lyle to get hot, the SDSU defense will have more work to do than in the first meeting.

Their 97-68 result against Wyoming was not only important for the Lobos for successfully working their lineup with two guys, who were rusty at first, returning. That victory also snapped a three-game losing streak and allowed the cherry & sliver to return to .500 in the conference with a 6-6 record in the Mountain West.

If SDSU wins on Tuesday, or Colorado State loses their game against Utah State, the Aztecs will clinch the MW regular season title.

MBB: Lobos host Eastern New Mexico for 2019-20 season opener
Nevada will be a tough challenge as the Wolf Pack looks for revenge
NCAA Tournament to be played without fans
Men's Basketball 357