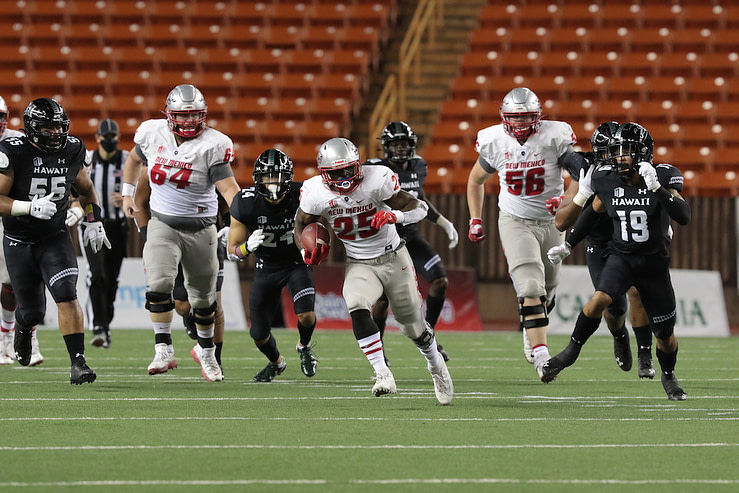 Trying hard is not enough.

After a 39-33 loss to the Hawaii Rainbow Warriors, the New Mexico football team is 0-2 this season. The cherry and silver program has lost 11 straight games overall, and 17th straight conference games.

“If you’re happy with trying hard, that’s a loser’s mentality,” said head coach Danny Gonzales. “If you want to convince yourself that moral victory is OK, then you don’t belong in our program and shame on you.”

Gonzales said the Lobos looked more physical in the offense and were better at running the ball, but some of the issues they had during their home opener against San Jose State were still present against Hawaii.

One of the most obvious ones is pass defense. The Lobos allowed Hawaii 410 passing yards. An improvement, but not by much from the 481 yards allowed to SJSU. This is an important stat that the Lobos need to fix. Last season, New Mexico had the nation’s worst pass defense, something Gonzales said he would not allow under his watch.

“The DB’s have it harder because I’ve been a DB coach for the last 20+ years. It drives me absolutely nuts when we give up long plays,” the head coach said.

Third-down conversions were also an issue during the season opener as the Lobos only converted 4 out of 14 against the Spartans. Against Hawaii, the Lobos went 5-15.

While the team plays with energy and the fighting spirit is obvious, keeping the momentum going hasn’t been successful. The Lobo offense started Saturday night hot. Quarterback Tevaka Tuioti led the Lobos to a 17-7 lead after the first quarter. By halftime, New Mexico was still on top 20-14, but Hawaii came out better in the last two quarters.

The Lobos, who are currently based in Las Vegas, have had to face a lot of unusual situations, but Gonzales said they can’t use that as an excuse. They just have to keep putting in the work and continue improving.

“Hawaii doesn’t feel sorry for us. I promise you Nevada next weekend ain’t gonna feel sorry for us,” he said. “So they better get their minds right and understand they have enough talent. They need to complete harder and play better.”

Notes
Tevaka received a hard hit on the head and left the field during the fourth quarter. He likely has a concussion but this has not been officially confirmed yet. Trae Hall came in, and might have to start next weekend if Tevaka is going through concussion protocol.