The New Mexico Lobos came close to pulling off another win against another top team in the Mountain West conference… until the last 10 minutes of the Thursday’s game.

Last time New Mexico and CSU met was on Jan. 19. The Lobos kept it close but had to settle for an 80-74 loss in Fort Collins. This time, New Mexico came in with some momentum after pulling off an upset against No. 22 Wyoming on Tuesday.

There was potential for another upset, but Thursday night ended with an 83-68 result in favor of the Rams.

New Mexico center Sebastian Forsling scored first, but the first four minutes belonged to Colorado State as the Rams went on to take a 9-2 lead. Colorado State averages 8.4 three-pointers per game, and the Rams started this game 6-of-8 from beyond the arc.

However, New Mexico was not intimidated.

Colorado State was off to a 12-2 start, but the Lobos are fighting back. pic.twitter.com/lPR1dg6HAv

Halfway through the first period the Lobos found a 20-19 lead. The game remained close the rest of the first half. New Mexico entered the break with a 42-40 lead thanks to a three-pointer by Javonte Johnson.

The second period also started close, but eventually Colorado State pulled away. The Rams led by 17 points at 83-66 with one minute to play. The Lobos weren’t helping themselves as they were shooting at 30.8% from the field during the second period.

“I think at the end of the day, what got us was lack of ball movement offensively… the offense let us down,” said New Mexico head coach Richard Pitino.

Colorado State also had three players in double figures. David Roddy showed why he is one of the top players in the conference with 31 points going 14-of-20 from the field. Isaiah Stevens and John Tonje added 12 and 11 points respectively.

Up next, the Lobos take on San Jose State on the road on Jan. 20 before heading to Utah on Feb. 22 to face the Utah State Aggies. 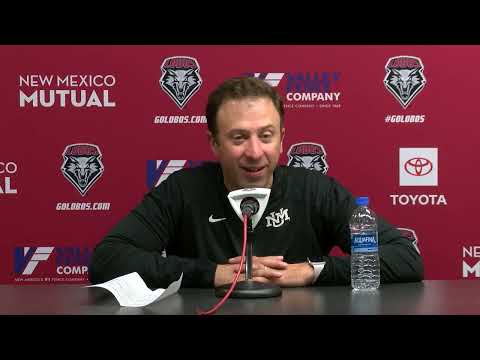