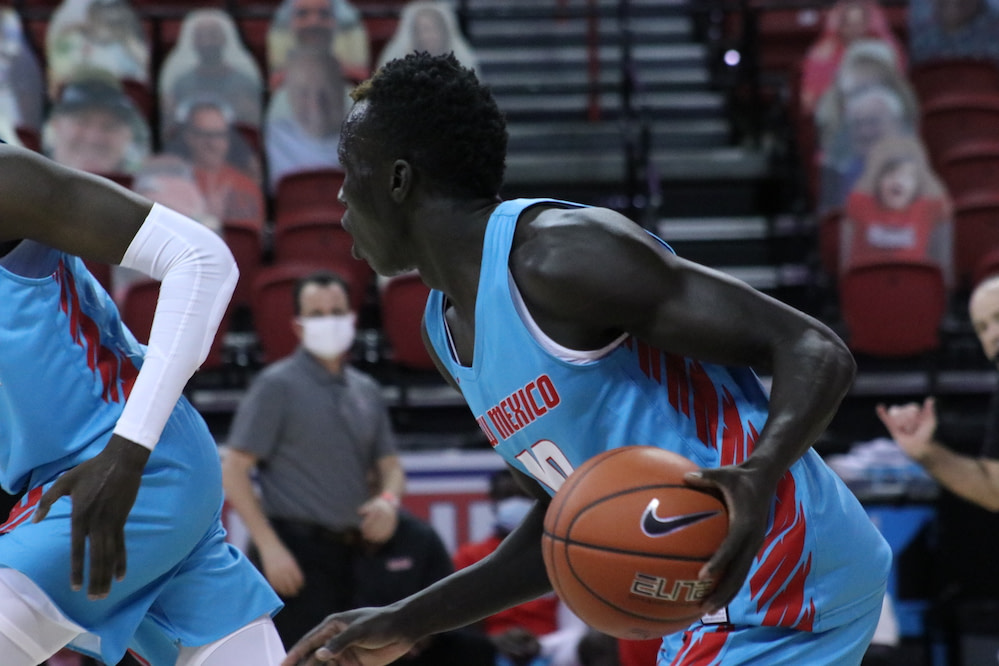 The New Mexico Lobos had a chance to get a win against a conference opponent that has also struggled this season, but instead they got blown out 77-54 by the UNLV Rebels on Saturday afternoon.

Two of the first three conference series for New Mexico had some of the best teams in the Mountain West. UNLV was supposed to be an easier opponent as the Rebels came into the game with only two wins overall. They also just returned to the court earlier in January after a month-long pause due to COVID-19 issues.

The Lobos found themselves down by 15-points in the middle of the first half. They got hot for a while and went on a 10-0 run that included two three-pointers by freshman Javonte Johnson. That run helped New Mexico cut the deficit to 25-17. But the Rebels shook it off and finished the half with a 37-26 lead.

The second period was rougher. The Lobos fell behind by as many as 26 points, which wasn’t too surprising as they were shooting at 30% from the field and missed all nine attempts from beyond the arc.

The Rebels had no issue with offense. They shot at 50% in both halves and had four players reach double figures with Cheikh Mbacke Diong’s 20 points leading all scorers.

By the end of the game, only Valdir Manuel and Makuach Maluach had reached double digits for the Lobos. Manuel picked up 10 points while shooting at 50%, while Maluach got 13 points but only went 4-of-15. The senior said he wasn’t worried about his shooting because he felt confident that he could do better. He said the team’s priority at the moment has to be defense.

Saquan Singleton got seven points but all of them came from the free throw line. The junior said the locker room talk after the game was not so much about scoring or any specific plays, but more about needing to be more aggressive.

Saquan Singleton (@Saeitaintso_) on what was said in the locker room after New Mexico lost 77-54 to UNLV:

“We gotta be the more aggressive team.” pic.twitter.com/D7y9Np3vJ3

“We just gotta keep chipping away and hope at some point we build up our mental toughness to play through bad stretches,” said head coach Paul Weir.

With Saturday’s result, the Rebels picked up their first conference win and improved to an overall record of 3-6, 1-2 MW. Meanwhile, the Lobos dropped to 4-7 overall and 0-7 MW. The teams will face again on Monday at 7:30pm MT.