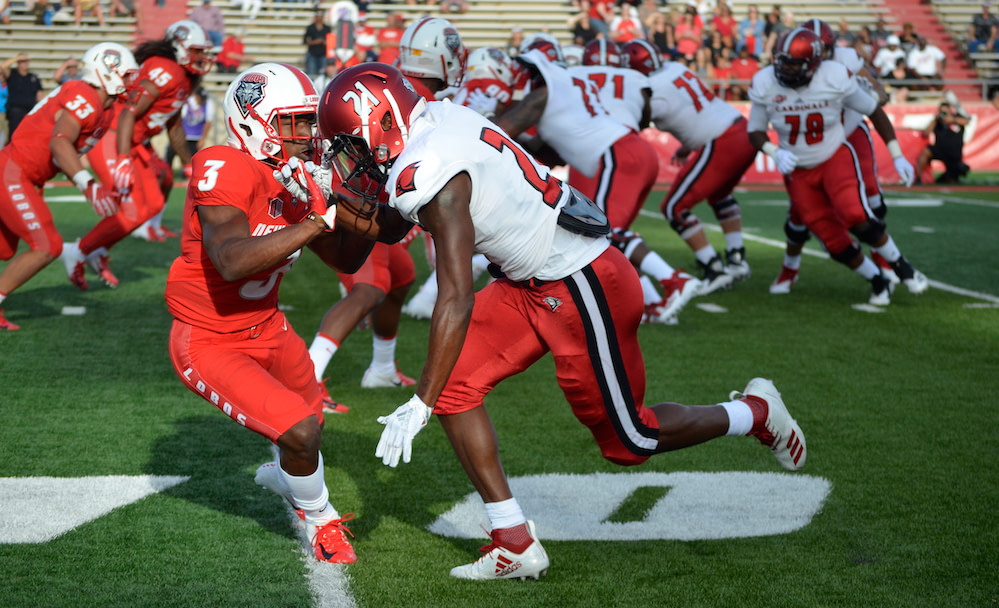 New Mexico was a seven-point favorite over Liberty University in Albuquerque last year. However, the visiting team was able to leave with a 52-43 victory. Will the Lobos return the favor, or will the Flames earn back-to-back wins against the cherry and silver?
Another high scoring game wouldn’t be completely out of the question this year. New Mexico is coming from a 55-51 win against the New Mexico State Aggies. Liberty’s last result was a 62-27 win over Hampton.
The Flames are currently at .500 with a 2-2 overall record. They opened the season with back-to-back losses, one of these to the then-no. 22 Syracuse. However, the Flames bounced back with straight wins against Buffalo and Hampton.
Liberty counts with wide receiver Antonio Gandy-Golden, who leads the nation in receiving yards with 544. He picked up 245 yards against New Mexico last season.
“It will be an impressive hostile kind of atmosphere. He is a big time player, number 11 (Gandy-Golden),” said New Mexico head coach Bob Davie, who will officially return this weekend. “He is an NFL wide receiver, he reminds me of Terrell Owens.”

The flames also have senior quarterback Stephen Calvert who threw for 417 yards and two touchdowns against the Lobos. Calvert is on the Johnny Unitas Golden Arm Award Preseason Watch List.
New Mexico is not currently doing too bad in the quarterback situation either. Redshirt sophomore Tevaka Tuioti threw 355 yards and collected 414 yards in total offense last weekend, this included three touchdowns. Liberty head coach Hugh Freeze was been impressed.
“Ever since he took over in the Notre Dame game, they really skyrocketed offensively,” Freeze said. “The numbers that they’ve put up since the second half of the Notre Dame game with him through this past game are pretty staggering. He presents a problem both throwing and running.”
The Lobo offensive line has helped UNM be the only FBS school that hasn’t allowed a single sack in the 2019 season. It will be interesting for the team to face against redshirt senior defensive end Jessie Lemonier who has recorded 14.5 sacks throughout his time with Liberty.
“There are no surprises. We know what’s coming, we know what’s waiting for us.” Davie said. ” It’s, ‘can we get better this week?'”
The game is scheduled for Saturday at 4pm Mountain Time. It will be available to watch on ESPN+.

Despite low outside expectations, Blackwell is confident on his team
How did the newcomers and recruiting service do in Game 1?
Football: Hayes MW Defensive Player of the Week
Football 64