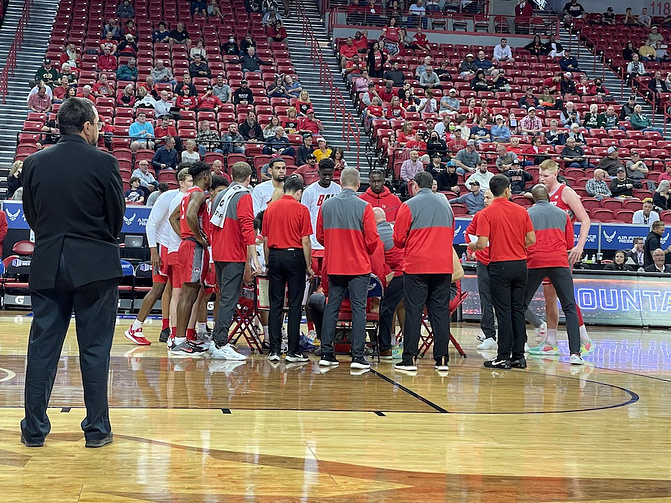 The Lobos fought hard, but the Nevada Wolf Pack knocked them out with a 79-72 win on Wednesday’s first round of the Mountain West Tournament in Las Vegas.

This was Richard Pitino’s first year as the head coach. The overall 13-19 record and 5-13 in the conference is not impressive on paper, but the team was inexperienced and had what Pitino constant described as a “decimated” front court. Pitino said that as a whole, there was a lot of growth and a solid foundation established.

It was a competitive game for most of the 40 minutes. The Lobos were up by as many as nine points with six minutes left in the first half but Nevada, a team that has also struggled to win games this season, kept on pushing.

Lobos up 30-21 after House makes the free throw pic.twitter.com/XdMF8YS0vA

New Mexico entered halftime with a slight 35-34 lead but went on to start the next seven minutes going 3-of-13 from the field. The teams took turns being ahead for the first few minutes of the second period.

The Lobos didn’t see the lead again after the 15-minute mark. Nevada was up by double digits with four minutes left, however, the game was winnable for the Lobos with a minute remaining as they cut the deficit to three points.

Nevada took 30 free throws on Wednesday and got four Lobos in foul trouble. Jaelen House had four fouls, while Jay Allen-Tovar, KJ Jenkins and Sebastian Forsling fouled out. Head coach Steve Alford said his team came into the game wanting to have the advantage in the paint, and things certainly went according to plan. The Wolf Pack beat the Lobos there 40-20.

“That’s part of attacking the paint, getting people in foul trouble,” Alford said. “I thought we did a good job.”

While losing is never the desired outcome, Pitino said he wanted his team to walk away with a positive mindset and looking at the bigger picture.

“The bottom line is I told the guys to take a step back, we showed a lot of growth this year,” Pitino said. “A lot of growth through a lot of adversity, a lot of youth and a lot of inexperience. We can learn from it. Disappointed to go home early, but proud of what we are building.”