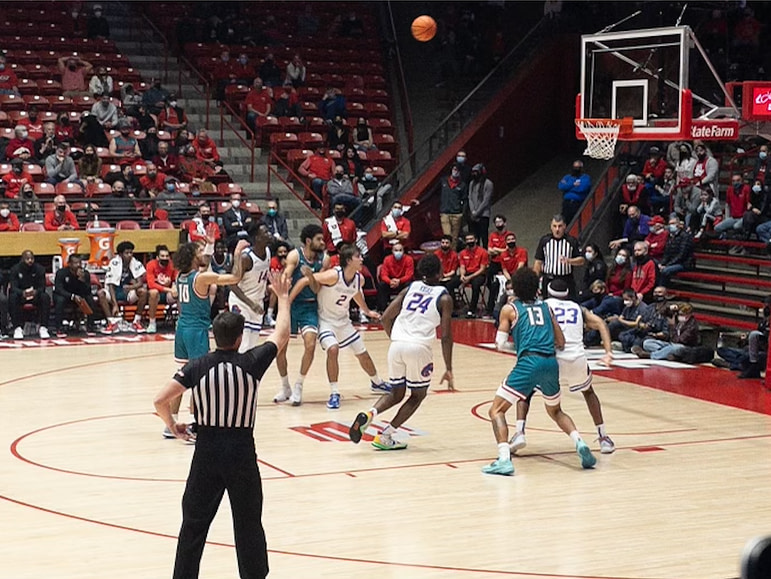 Entering Saturday’s game, there was no doubt that the New Mexico Lobos would find the Boise State Broncos to be a big challenge.

The Lobos have struggled with size this season, which Boise State definitely has. And as head coach Richard Pitino put it, the New Mexico front court is “decimated.”

The evening ended with the Lobos settling for a 73-61 loss and dropping to a 7-10 overall record. New Mexico is still looking for a conference win with a 0-4 MW record.

“Pretty obvious why we came out on the losing end,” Pitino said. “They are bigger, they are stronger, they’re older for sure. But we gotta be scrappier, we gotta be dirtier. We gotta be meaner. Especially when you are as undermanned as we are.”

New Mexico kept it close at the beginning of the game, even putting some good effort on defense. However, when the clock read 6:38, the Lobos went on a scoring drought until one minute remaining in the first half.

Broncos are big, but check out this defensive effort by the Lobos… pic.twitter.com/cQ1rSMFpF4

In those first 20 minutes, Boise State state found a 32-22 lead and a 26-9 rebound advantage. Not surprising, as the Lobos struggled in this area even early this season before losing key players. Boise State also entered the game as one of the top rebounding teams in the Mountain West conference.

The Lobos started the second half better than they ended the first one. In the first four minutes of the second half, they had already registered five rebounds. They also held the Broncos to only two points in the first five minutes. However, Boise State found a 16-point lead at the 6:25 mark.

Four New Mexico players scored in double figures, with Jaelen House as the leader with 21 points on 8 -for-13 shooting and also a team-high seven assists. The other three were KJ Jenkins (15 points), Jay Allen-Tovar (11 points) and Jamal Mashburn Jr (10 points). Javonte Johnson, who is a talented shooter and has proven he can step up in the offense, did not take a single shot on Saturday. Pitino said it was because the team is still learning to move the ball and get him shots.

Rebounds and sharing the ball are just two things in the list of things the Lobos have to work on, but Pitino said he believes this team is made up of “very coachable” players and that with time the program will see more success.

“We will get there. I can’t fault the effort,” he said.

Up next, New Mexico will take a roadtrip to Colorado to take on the Colorado State Rams on Jan. 19.