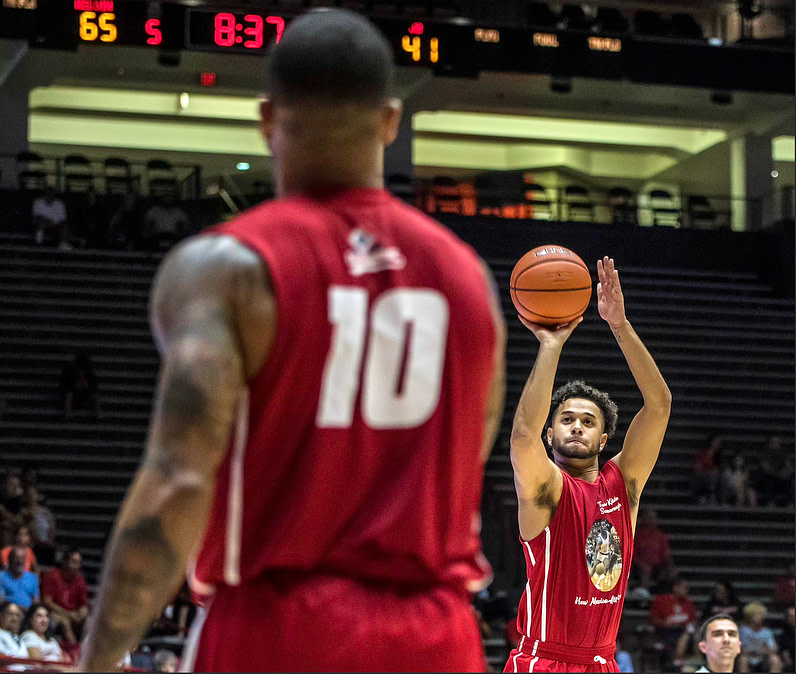 Anthony Mathis was the 2021 New Mexico Alumni Game 3pt Contest winner. The 6’3 guard made 22 out of his 25 attempts. Mike Sandoval/The Lair

The Pit saw some all time Lobo favorites take the court on Sunday for the 2021 New Mexico alumni game.

Both teams raced to hit the target score of 134, and in the end it was Darington Hobson who called game.

“I looked over to the JB White team and I said, ‘The game is over. I’m shooting this off the backboard.’ I actually called that,” Hobson said. “I work on it all the time, so I just shot it.”

Papa Brown 3pt Contest: Fans got the much desired battle between Anthony Mathis and Chad Toppert. Mathis came out victorious after making 22 out of his 25 attempts.

Miranda Sanchez Dunk Contest: A lot of missed dunks, but by the end of the night JR Giddens showed that 36 years old is still young enough to get some height.

The Enchantment will take on its first TBT opponent, The Stillwater Stars (made up of Oklahoma State alumni), on July 17. Kenny Thomas, head coach for The Enchantment, said he already started scouting their opponents. The former NBA player said he is looking to put in a full court press and some zone.

The team will be working out in Albuquerque for a few more days before hitting the road.

Here is what @Enchantment_TBT head coach @kennythomasnba said about preparing for their first opponent, the Stillwater Stars (@okstateTBT), on July 17. pic.twitter.com/SzkhfUBSAN