New Mexico opened the season with an 87-84 road victory over CSUN on Tuesday. This weekend, the Lobos are at home to host the second annual New Mexico classic. They play an exhibition game against Northern New Mexico on Saturday at 7pm.
The NCAA gave an update on Carlton Bragg. And Drue Drinnon is almost ready to get back on the court.
Carlton Bragg
New Mexico heard back from the NCAA earlier in the week but officially sent out a statement on Thursday. Bragg’s waiver to play right away was denied. If the ruling stands, Bragg will be eligible to play on Dec. 16. However, head coach Paul Weir said the staff was looking to appeal.
“We will attempt to continue to work with officials both at ASU and the NCAA in regards to Carlton’s eligibility,” read Weir’s statement. “Based on the documentation we have received thus far, we are shocked at the current outcome of his eligibility status. Hopefully this can be rectified quickly with an eye toward the interest of the injured party.”
Bragg can’t play this Saturday, even if the game is an exhibition. He can only do normal practice and open practices (like the Cherry & Silver event).
Injuries

Point guard suffered an injury during New Mexico’s closed scrimmage with NAU. He is expected to be back soon. Isabel Gonzalez/The Lobo Lair

Drue Drinnon is “questionable” for Saturday’s exhibition. Weir said Drinnon has done some “light movement” and the staff is going to see how he reacts in the next couple of days.
Jordan Arroyo
Walk-on Jordan Arroyo has been impressing the coaching staff. He started during the NAU scrimmage and played eight minutes against CSUN.
“Jordan Arroyo has exceeded any expectations I had or the staff had with regards to his work ethic, with regards to his energy, his body language, his commitment to this team. He’s been exceptional,” Weir said.
Recruits
Ray Somerville listed New Mexico as one of his Top 6 schools on Aug. 27. This Thursday, Somerville tweeted he had committed to Cal-State University, Bakersfield.
New Mexico Classic
The UNM men’s basketball program is hosting the second annual New Mexico Classic. The Lobos play Northern New Mexico for an exhibition game on Saturday at 7pm. Other schools taking part in this are Fort Lewis, Western New Mexico, New Mexico Highlands, and Eastern New Mexico. 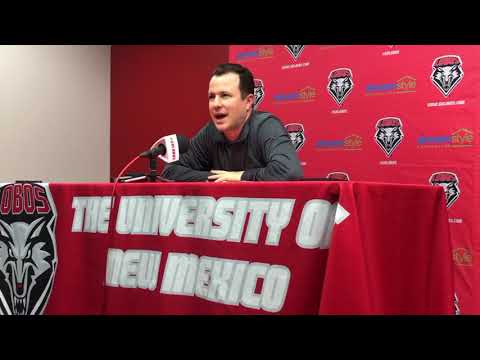