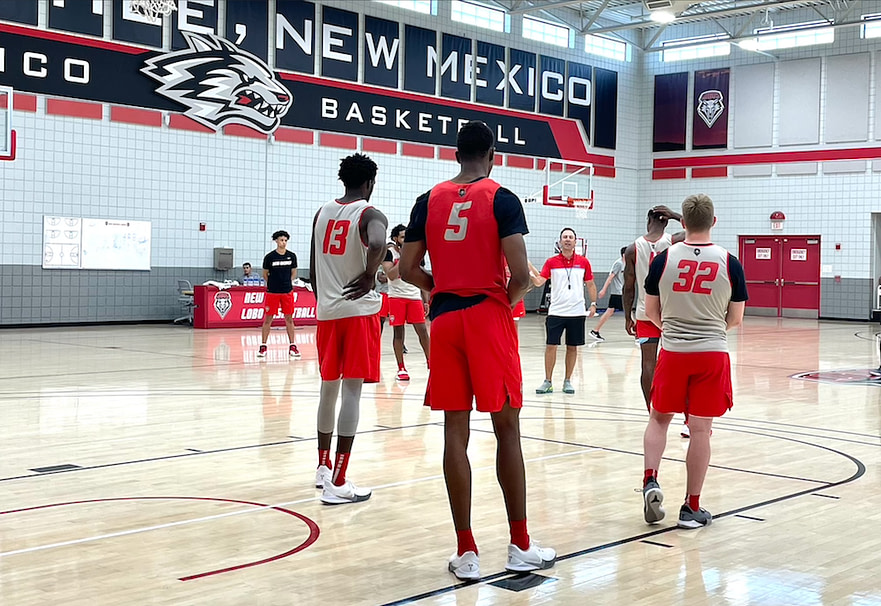 The New Mexico men’s basketball team has had about a week and a half together. It’s still too early to say much about what can be expected from this roster, but here are some updates on a couple of players and other Lobo basketball related news.

The Enchantment will start practice the week of July 9. Before they head to the tournament, fans can watch the players at The Pit on July 11th with Team JB White going against Team Kelvin Scarborough.

New Mexico! We need The Pit ROCKING to get us ready before we head to @thetournament ‼️‼️

SMASH THAT TICKET LINK ASAP AND HELP US #PACKTHEPIT 🔥

The TBT selection show will be on Monday, June 21 at 11am MT. There will be a link to watch available on all TBT social media channels.

The team hasn’t had a lot of time together so some sloppiness was to be expected. The team worked on shooting and defense drills, then had a scrimmage that the media was allowed to watch. Everyone is still getting to know each other, but overall the team looks like they have a lot of energy and there is a lot of potential.

Head coach Richard Pitino will have a press conference next week to talk about how the team is doing.

He made that clear on Tuesday. This isn’t exactly a secret, but we didn’t see much of it last year. Johnson averaged 30 points and and 10.2 rebounds per game during his high school senior year, however, last season he didn’t really reach his potential. Johnson is still working on his shot selection, but he showed he has talent.

Javonte Johnson (@otn_jay) was one of the best shooters during today’s practice. pic.twitter.com/nvYUwRLb9P

House struggled with jumpers during Tuesday’s scrimmage but he looked good during the shooting drills. He has good speed, was the fastest of the players when they raced each other. He is very vocal and will likely be a good leader for the team. Pitino said he is impressed with him and likes his confidence. As for House, he said he is ready to embrace that role.

“I’ve been in a leadership role before. In high school I was a leader so I feel like I can help us out here,” he said.

House said he chose UNM because of the culture and is looking forward to playing in front of fans because he’s heard a lot about The Pit.

“I heard it gets very loud, almost like an NBA venue,” House said.

The point guard went on The Sports Animal with J.J. Buck and Jeff Siembieda. Check it out!

Eloy Medina, who came from West Mesa High School, has entered the transfer portal. He was a walk-on, so the Lobos are still one scholarship over the limit.

Jenkins hurt his foot (nothing serious, according to Pitino) and didn’t participate with the team on Tuesday. He was there doing individual workouts.

He said his focus is to do whatever he can do help his team win and likes Pitino’s philosophy of taking one day at a time and focus on getting better everyday. Jenkins said he is very open and is looking forward to fans talking to him and getting to know him.

One fun fact about him is that he can cut hair and will help his team look stylish.

“I’m going to be the barber of the team. The barbershop,” he said.

It’s about time we connected 🐍 pic.twitter.com/40NX8tVYro

Some of the latest offers