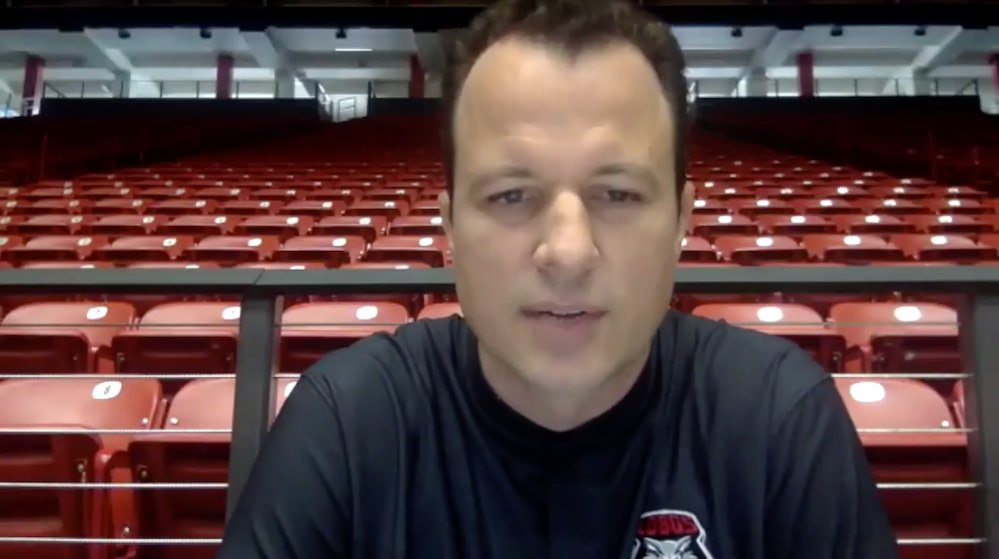 University of New Mexico men’s basketball head coach Paul Weir held a press conference on Tuesday to give an update on topics ranging from the online class he is teaching to new players who are joining the Lobos.

The team is currently working out in groups of four or less. Weir said he is trying to just focus on training his players for whenever the NCAA tells them it’s ok to play, a decision that is expected to be announced mid-September.

Professor Weir
Weir is two weeks into teaching his own class titled The Business of Intercollegiate Athletics. It’s a traditional online class that is part of the UNM Anderson School of Management.

“It’s been an amazing experience so far,” he said. “It’s been incredibly stimulating to meet new students and hear their thoughts and ideas.”

Makuach Maluach has been outstanding
Players are receiving stats everyday to see how they compare to each other in different categories. Maluach is leading most, if not all, of them. He even broke former Lobo Anthony Mathis’ three-point contest record.

Weir said there’s no question Maluach has been the best player through the offseason workouts. The senior has a quiet personality, but that is not a concern because Weir has worked with players like RJ Barrett (New York Knicks) and Pascal Siakam (Toronto Raptors) who lead by example.

“His example, particularly for the younger guys, is great for us. I’m not going to turn it down,” Weir said of Maluach. “I think leadership can come in different forms and I think his leadership right now, by just the way he is attacking his workouts, our competitions, just our team in general, has set an excellent standard that you can’t help but follow if you’re on our team right now.”

This is not the first time Maluach receives praise. Last year, Weir said Maluach was potentially the MVP for the team.

Weir didn’t want to put too much pressure on the young player, but he did speak about his work ethic and called him a “gym rat.”

Check out incoming Lobo Javonte Johnson (from about a week or so ago).

Quick reminder… @otn_jay averaged 30 points and 10.2 rebounds last season. He’ll be a fun one to watch in New Mexico. pic.twitter.com/uX0W0XJNAv

The staff believes Bayron Matos can possibly make an impact right away, especially now that he gets to work with the newest assistant coach, Scott Padgett.

New additions
Jeremiah Francis is officially eligible to play next season. UNM found out last week that the waiver submitted by North Carolina was approved.

“It’s a huge boost to our team. I think it really significantly impacts our trajectory, our ceiling as a team this year,” Weir said.

Weir said he has the ability to play center and some power forward. The coaching staff has known him for a while. Former assistant coach Jerome Robinson recruited him out of high school, but he ended up going to junior college for academic purposes. Manuel is from New Jersey, and assistant coach Dan McHale had good relationships with people in New York so was able to pick it back up.

“I quite honestly feel if we can get him into shape and healthy, he is an all-conference type of player,” Weir said. “He turned down some terrific schools and opportunities to come to us.”

New Mexico is also adding Eloy Medina from West Mesa High School as a walk-on. Weir described him as an “elite shooter.”

A quick look at West Mesa's Eloy Medina. Possibly one of the more underrated stars in the state. pic.twitter.com/FDvoIUOlzA

Fast team
Weir said this roster was fast, so Robert Portnoy asked him if the “run and stun” was returning this upcoming season. His answer? “No doubt.”

Brandon Mason
Assistant coach Brandon Mason was arrested for aggravated DWI on Aug. 14 and was suspended immediately. The school announced on Aug. 19 that he had resigned.

“A lot of that is in HR. I think everyone knows I’ve known Brandon for a very long time,” Weir said. “I gave him his first coaching job. I’m going to continue to support him in the future and I really hope and pray, I think we all do, that his next step in life becomes the best one he’s ever had.”

Zane Martin
Martin announced he was entering the transfer portal on Aug. 11. He ended up returning to Towson University, the school he played for before transferring to New Mexico. Weir said he is going to support him however he can so he can be eligible to play next season.

“I think he has some personal items that I’m not going to comment on,” Weir said. “If he wants to he’s more than welcome to, but I’m happy for him. Just like Vance (Jackson), it was time. They were ready to move forward and I think we were as well…. I’m going to be cheering them on like everybody else, nothing but good feelings and vibes towards them and their future.”