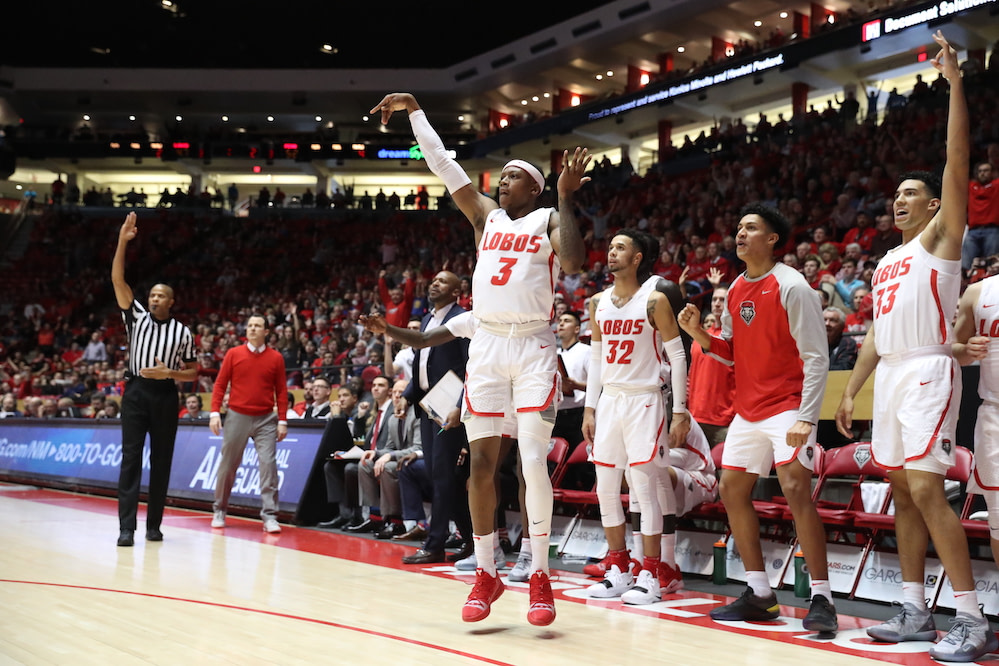 MBB: Lobos release 2019-20 schedule, getting ready for the season

The University of New Mexico men’s basketball team released the 2019-20 schedule on Thursday afternoon. Head coach Paul Weir said he’s challenging his players more this year and expects the team to figure out a lot of stuff before the season even begins.
“Going into this year, we expect our team to be very competitive,” said Weir regarding his approach to scheduling. “We went into it saying we want to have as competitive a schedule as we possibly can because we have a team that can probably withstand that. That can fluctuate a little bit from year to year based on how you feel about your team and where it’s going.”
Click here to see the full 2019-20 Lobo Men’s Basketball schedule.
The Lobos will officially begin their season by hosting Eastern New Mexico on November 6. However, they will be tested before the season tips off by facing two different opponents in scrimmages that are closed to the media and the public. Weir said he will not say much about these games before they happen. What he did share was that one of the teams has a particular style of play the Lobos want to play against. The other is a preseason highly rated team that is probably the best team UNM will get to play this season.
Weir said the Cherry & Silver game is also an important part of preseason. He was asked about the Howl, a tradition at UNM before his arrival, and he explained that the Cherry & Silver came from a discussion about marketing as well as trying to find a balance between entertainment for fans and preparation for players.
“When I first got here there was some conversation from administration at the time, that maybe it had run its course financially and attendance-wise, and maybe we should transition it into something else,” Weir said. “The Howl in its existent was more entertainment-oriented, which is great. The Cherry & Silver game is more game-oriented, which I think can be a little more beneficial to the competitiveness of our team, and hopefully a blend of both worlds”
The first four games of the schedule will be played in Albuquerque, and therefore help the Lobo team get into the season with the comfort of home court advantage. But Weir said starting at The Pit should just be “icing on the cake” because the games and practices happening mid to late October should already give the team a good sense of where they stand.
The first road trip will be for UTEP in El Paso on Nov. 19 followed by New Mexico State in Las Cruces two days later. Weir said he got the idea of combining these two trips from Lobo women’s basketball head coach Mike Bradbury (Click here to see the full 2019-20 Lobo Women’s Basketball schedule).

While November is not quite around the corner just yet, the Lobos have already been putting in work. Men’s basketball assistant Brandon Mason has a “breakfast club” at Davalos, and Weir said the team spent the summer playing different sports and cross-training.
“Based on a pretty serious injury last year, I’ve spent a lot of time just trying to know more about the body and keeping it healthy. We are making sure we are doing everything we can to keep these guys in the best physical condition they can be,” the head coach said.
The staff has also invited special guests to speak during practices. Some of the speakers include Hugh Greenwood, Kenny Thomas, and Preston Dennard. Hunter Greene was the most recent one as he talked to the Lobos on Thursday.