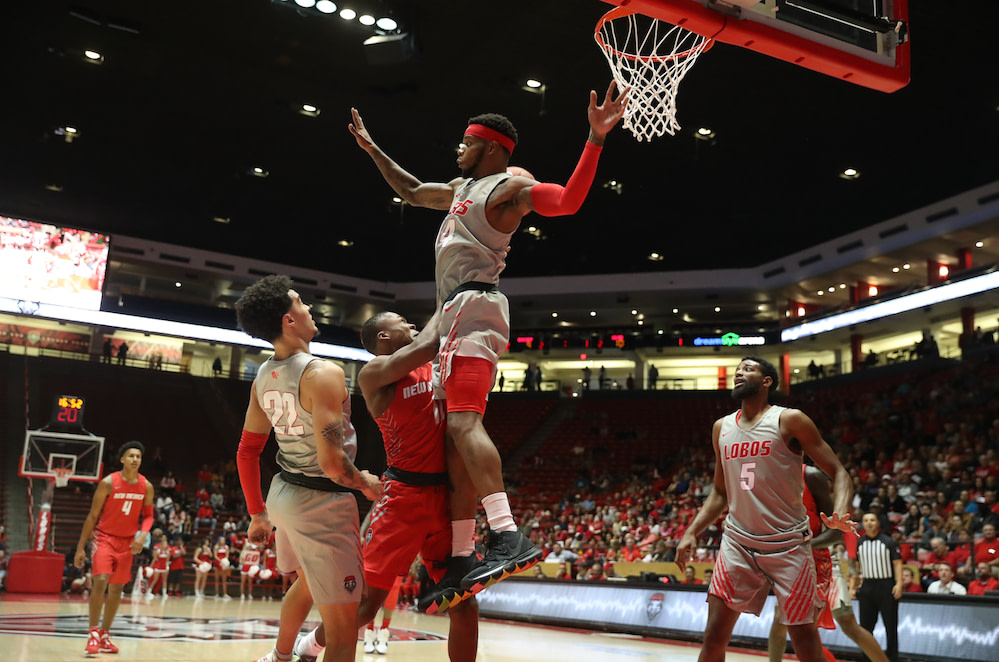 Nov. 6, 2019
7pm MT
New Mexico vs Eastern New Mexico
Watch: Mountain West Network
The University of New Mexico men’s basketball team officially begins the 2019-20 season by hosting the Eastern New Mexico Greyhounds on Nov. 6.
These two teams don’t play official games too often. The Lobos and the Greyhounds have not met during a regular season since Nov. 29, 2000. UNM leads the overall series 15-1, with the only loss for the Lobos being in 1991. Most recently, the two teams faced each other during an exhibition on Nov. 4 2016,  when the Lobos picked up an 88-66 victory.
Eastern New Mexico is coming from a 59-107 loss from an exhibition with the University of Tennessee, a Sweet 16 team, on the road.
The Greyhounds finished last season with a 13-14 overall record. They enjoyed a 7-2 record at home but were 4-8 in away games. Their leading scorer was guard Devin Pullum who averaged 12.7 points per game as a sophomore. Pullum, now a junior, doesn’t seem to be slowing down this season. He led his team with 18 points, including four three-pointers, during the exhibition game last week.
The Lobos played two scrimmages during the offseason but those were closed to the public. Head coach Paul Weir did not have a set rotation last week. However, he said he wasn’t stressing about it yet because he wanted to give players an opportunity to keep proving themselves.
Weir said he would set more specific plans for the season a couple days before Wednesday’s game. He also added that the same team seen against Eastern New Mexico might not be a complete representation of the Lobos quite yet. As of last week, the cherry & silver still needed to find some consistency in the offense and was still trying different defensive plans.
UNM finished last season with a 14-18 overall record, 9-7 while playing at the Pit. The lead scorer was Anthony Mathis  (14.4 ppg) who is now a graduate transfer at Oregon. The Lobos still count with their second and third leading scorers Vance Jackson (13.1 ppg) and Cartlon Bragg (10.5 ppg).
This season’s roster also counts with other players who are getting attention from national media. JJ Caldwell has gotten a reputation of being the best passer on the team. JaQuan Lyle is also a talented passer and will finally get a chance to play this year after sitting out due to injury last year.
New Mexico has been described as a team that is under the radar, they will soon have the chance to show whether or not they can truly live up to their potential.