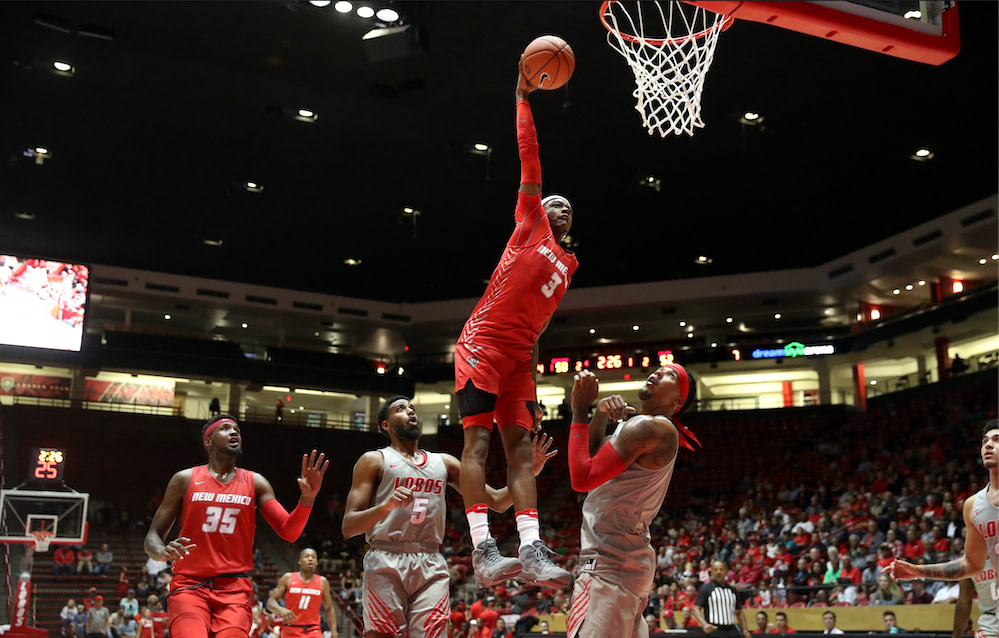 MBB: Lobos described as "under the radar"

The New Mexico Lobos are still waiting to officially play in front of fans on Nov. 6, but they already made their return to the court in preparation for the season opener. UNM has something to prove in the Mountain West. The team is predicted to finish third in the conference, not a single player received a preseason honor even with individual players getting attention from national media.
Head coach Paul Weir said the first game of the 2019-20 season against Eastern New Mexico should not feel like a warmup. He said he expects his team to already feel prepared from practice and the two closed scrimmages the Lobos have on their schedule. Weir couldn’t really talk about them, but the secret opponents didn’t take long to come out: Portland State and Oregon.
When Weir mentioned the scrimmages, without saying the name of the schools, he said one of the teams was going to be considered an “interesting opponent” and probably the best team his roster will face this year. The word “interesting” likely referred to the fact that his current roster is going to be facing former Lobo Anthony Mathis. The game against the Oregon Ducks is this weekend.

Oregon took on Seattle on Oct. 19 and Jeff Goodman reported a 61-56 win for the Ducks. Mathis seems to have led the winning team with 12 points. Not too surprising as the grad transfer averaged 12. 7 points during his junior year and 14.4 points as a senior at UNM.
Meanwhile, New Mexico is coming from a small-margin victory over Portland State. While some players might have looked a little rusty, there were also highlights such as Carlton Bragg being perfect from the field.
Bragg is one of the players who many experts are predicting will be instrumental for New Mexico’s success. The senior sat out until December last season due to NCAA transfer rules, in total he waited a year and a half to play again. That was a long time to be on the bench, but he still pulled off decent statistics averaging 10.5 points, 8.8 rebounds, 1.3 blocks per game.
The Lobos play their first four games of the 2019-20 season at home, then take a road trip for the UTEP and NM State games in El Paso and Las Cruces respectively. Late November will be a bigger challenge as UNM travels to New York for the Legends Classic with Auburn as the Lobos’ first round opponent.
Jon Rothstein said the tournament in Brooklyn is “under the radar” and that New Mexico could surprise it’s conference.

Analyst Andy Katz also described New Mexico as under the radar. The Lobos are one of 11 teams chosen by him.
“The Lobos did lose Anthony Mathis to Oregon,” he wrote. “But the return of Carlton Bragg, Vance Jackson and JaQuan Lyle means the Lobos have the talent to get to the NCAA.”
Katz gave individual props to Lyle in a different article.
“He was the third-leading scorer on the Buckeyes as a sophomore…Lyle has a chance to be a leader and a solid playmaking/shooting guard for a team that should get more buzz as the season progresses,” he said.
Jackson was last year’s Mountain West Preseason Newcomer of the Year. He had some good  moments throughout the season but when he really started shining was during the 2019 MW Tournament. Jackson registered 26 points against Wyoming in the first round and 25 points against Utah State, the tournament champions, in the second. Those postseason performances earned him a spot on the MW All-Tournament team. During his 2018-19 campaign as a Lobo he played 32 games, 16 as a starter, and averaged 13.1 points per game.
Other players to keep an eye on are JJ Caldwell and Makuach Maluach.
Both Bragg and Lyle, who were team captains, called Caldwell the “X factor” in this year’s Cherry & Silver event because he is a talented guard and the best passer on the team. There were a lot of eyes on Caldwell, who was part of Bragg’s Cherry roster that came out victorious against Lyle’s Silver. But it wasn’t his performance that stood out the most on the stat sheet.
Maluach quietly made himself heard as he led all scorers with 23 points on 10-13 shooting from the field. After the game, Weir said this didn’t surprise him. The coach had sent the 6’7″ junior an article on the Celtics’ Jason Tatum bouncing back from a less-than-ideal season. Both the coach and Lobo agreed that Maluach can turn things around just like Tatum did. It’s not like Maluach was a bad player. He was on the court for 32 games last season, 28 as a starter, while averaging 9.9 points and 4.0 rebounds per game. But Weir believes he is capable of more.
Weir has spent preseason talking about the competitiveness he sees in his roster. He said figuring out the rotation wasn’t going to be easy, but also added that he is glad there are multiple guys who deserve playing time.
“You have guys who have bought in and really want to go out and compete,” he said. “It’s a good problem to have so it’s an exciting time.”