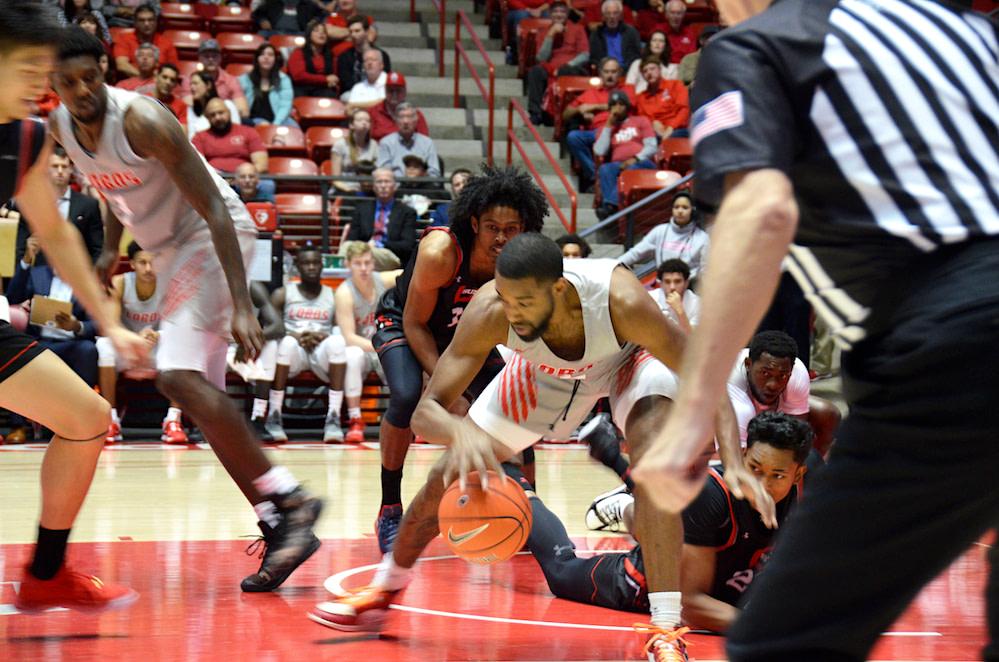 The New Mexico Lobos are 2-0 after a 97-70 win against CSUN at The Pit on Saturday night. However, the 27-point victory is not going to be what the Lobos focus on moving forward.
“The way I’ve approached this season is drastically different than others. The t-shirt I wore the first day of practice was “process.” The first thing we talked about the first time we met with them was process. This is a team that’s really going to have to embrace it. It’s a long journey together… I really want them to embrace a very process-oriented mindset to our games.”
The Lobos had a good start, reaching an 8-3 lead by the time the clock read 16:52. But less than three minutes later, the Matadors had found a way to take a one-point lead at 15-14. New Mexico eventually took control again and began creating a bigger gap with a 7-0 run toward the end of the first period. By halftime, the score was 43-32 in favor of the home team.
Click here for Box Score.
During the post game press conference Weir said he was pleased with how much better the Lobos played in the second half. His team never went below a double digit lead. JaQuan Lyle had been the only Lobo to score double digits for the Lobos in the first half. During the second, four other players achieved this too.
Lyle finished the night with 18 points on  7-for-10 shooting. Corey Manigault and Carlton Bragg followed with 17 points each. Zane Martin was shooting at 4-for-11 from the field but still pulled 13 points with help of two three pointers. Keith McGee registered 10 points.

Keith McGee taking matters into his own hands. Rebound and a dunk @why_notkeith pic.twitter.com/JXSVlrIti4

Offensively, New Mexico has been focusing on getting in the paint. This proved successful on Saturday as the Lobos were able to pick up 56 points from there. Overall the team shot at 60% from the field, but the power of the Lobo offense has never been questioned. Weir and the rest of the coaching staff are trying to improve the team’s defense. While their performance still wasn’t always smooth, Weir was happy with the shots the Lobos were forcing CSUN to take.
New Mexico got Elijah Harkless to shoot at 1-for-7 from the field and Darius Brown II at 4-for-10. Both kept their scoring to single digits at three and nine points respectively. This was a good reflection on the Lobos, as those two players had scored in double figures during their exhibition match and their season opener.
Terrell Cortez had also been scoring in double digits and he did it once again on Saturday with 14 points. However, it was teammate Lance Coleman II who led all scorers with 19 points. Coleman took a total of 16 shots from the field and made eight of those.
Weir said CSUN has good athletes and that the way they began the game showed how hard they can play. He admitted he saw them get into a bit of a rhythm but was glad to see his teams’ defense getting stops.
“It’s crazy that this isn’t really about winning and losing as much as it is about just trusting the process and continuing to grow” the head coach said.
Up next, New Mexico hosts Green Bay on Wednesday at 7pm MT and then McNeese State on Saturday at 4pm MT for the Legends Classic.

Notes
Drue Drinnon was on the bench for the Lobos wearing a Polo. He had left recently for what Weir said was a personal family situation and when (or if) he would be back was not known.