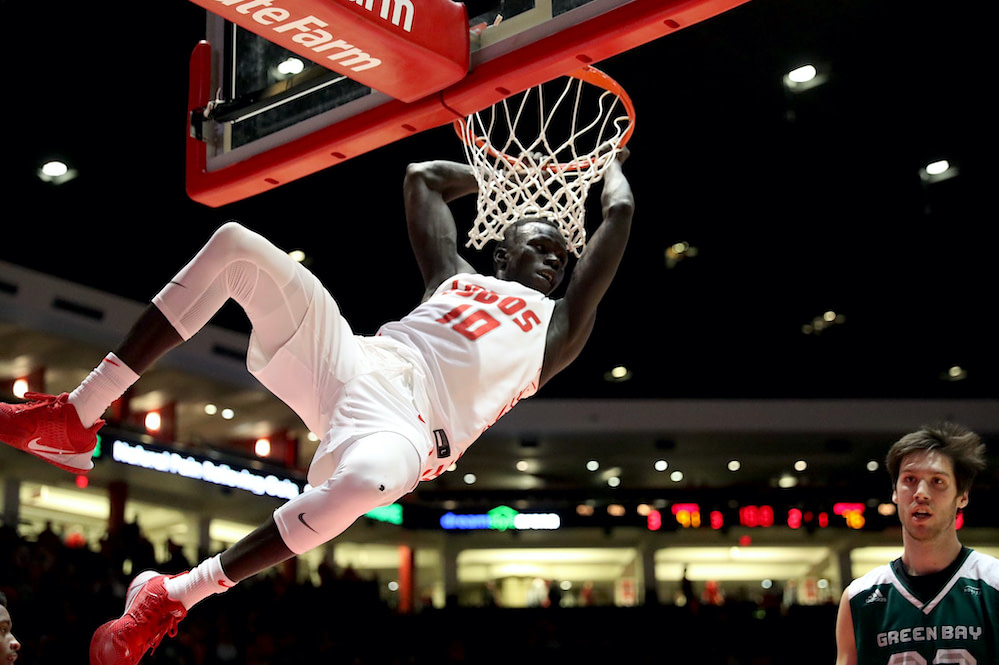 Makuach Maluach has been “quietly” averaging 12.3 points per game throughout the first four games for the New Mexico Lobos this season.

The way he describes his approach to offense sounds simple, but that’s not an accurate representation of him.

The word “quietly” has to be used because his team has plenty of guys who are expected to have more power in the offense and also louder personalities. But what Maluach plays is efficient basketball, and that is the most valuable skill to the New Mexico coaching staff at the moment.

“Makuach so far has been exactly what we need him to be,” said head coach Paul Weir. “He is a junior who has played for two years, a lot of basketball. He helps round out the guys on the floor no matter what the lineup is.”

The Australian player has been getting more recognition for his abilities this season, but the beginning of his junior year is not how his previous season went.

During his freshman year in the 2017-18 season, Maluach was shooting at 55% from the field and 46% from beyond the arc. These stats went down to 38.3% FG and 32.8% three-pointers the following year. It didn’t help that the team struggled overall with a 14-18 record. Maluach said he didn’t take losses well, which overall didn’t help him reach his potential.

A “bad” sophomore season is probably not something Maluach wanted on his resume, but he is in good company. Before this season started, Weir sent him an article on the Boston Celtics’ Jayson Tatum having a less-than-ideal year after what was a brilliant rookie season. Tatum put in lots of work during the offseason to try to get back on the right track and prove his first NBA season wasn’t a one-and-done thing.

“That is exactly my story,” Maulach said. “The season I had last year compared to the season I had my freshman year, I’m just trying to be better this year. Forget that good season and that bad one, just start new again.”

During the summer, Maluach made it a point to not try too hard to be the leading scorer. He said he trusted his teammates on that area and figured he should help them out by improving his own defense.

His goal, he said, is to become one of the best defensive players in the league. He is also looking to get more rebounds and do anything else that the team needs to be successful as a whole.

Weir said he can definitely see the work Maluach has put in and has been very open about how much he considers him a valuable asset to the team.

“Quite honestly he has probably been our MVP,” the coach said. “He’s probably the guy who gets the least recognition from all these other guys that have notoriety around their names.”

For any player, this kind of support from their coach makes a difference. Maluach said Weir has encouraged him to let go of anything negative and just continue to grow.

“I think Weir is the only guy who understands me. I’ve been here the same time he has been here. So me and him have a good relationship,” the player said. “He understands where I’m coming from and I understand what he’s thinking. I think that relationship is going to help us, me especially, this year.”

Loading...
Newer Post
Lobos get first loss of the season at UTEP
Older Post
Lobo Women Play NMSU In 1st of Five Straight On the Road