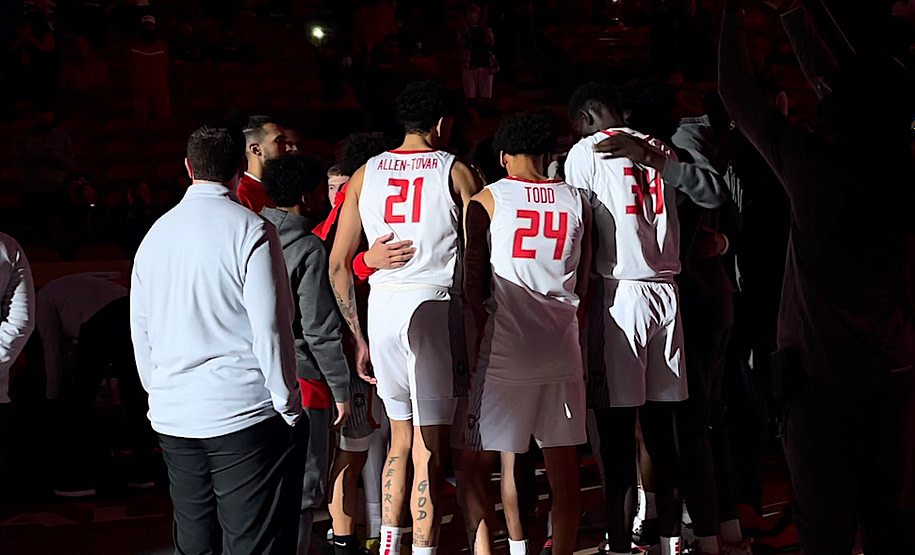 “Everyone in the world will know my name soon,” he tweeted on Friday afternoon, about five hours before the Lobos hosted New Mexico Highlands for an exhibition game.

The Lobos grabbed a 101-72 win over the Cowboys, with Allen-Tovar as one of the players who ignited the offense.

The 6’9 forward did not miss a single shot during the first half, going 5-of-5 from the field. He then opened the second half with two dunks to put him at 7-of-7, something he said he didn’t realize happened until after the game. Allen-Tovar went on to finish the night with 17 points on 7-of-9 shooting. The two shots he missed were three-pointers.

“I don’t really worry too much about missing shots,” Allen-Tovar said. “When I missed that first three I was laughing. I don’t dwell too much on making shots, that is just going to take me out the game.”

Jamal Mashburn Jr. was the other Lobo who got the offense going in the first half. He reached double figures at the break with 11 points by going 4-of-6 from the field. He didn’t score more points in the second half and only attempted one shot in those last 20 minutes. But a dunk he made in the first period was something everyone left The Pit talking about.

“The dunk was unbelievable. I’ve never seen him dunk,” said head coach Richard Pitino. “We gotta make sure that’s on Sports Center’s Top 10 because that was shockingly impressive. Mash is great. He is all business. Every single day he comes in and works. There’s no nonsense to him.”

Javonte Johnson and KJ Jenkins both led the New Mexico offense with 18 points each. Johnson, a sophomore, recorded his first double-double as a Lobo with 11 rebounds.

“He works really, really hard. He’s kind of all business, like Mashburn,” Pitino said about Johnson. “He’s got size. With Saquan (Singleton) out, we have to add some size at the wing spot. But he just competed very well. To get 18 and 11 in 22 minutes, that’s impressive, that’s efficient.”

Point guard Jaelen House wasn’t having the hottest shooting night at the beginning. He went 3-of-7 in the first half but did contribute in other ways. He showed good leadership throughout the game and led the team with a total of eight assists. House also eventually made more shots and finished the game with 12 points by shooting at 50% from the field.