Even though it was less than a week ago, the high from the win against a ranked Wyoming team is gone. The New Mexico Lobos had to swallow a 71-55 loss to the San Jose State Spartans on Sunday, their second straight loss.

When the Spartans visited The Pit on Jan. 28, New Mexico registered an 86-70 win. But the Lobos had to know the Spartans were going to be a more dangerous team this time around.

Not only was it a home game for SJSU, the team also returned Ibrahima Diallo after missing 18 games due to a knee injury. Before he sat out, the 7’0″ center led the team in rebounds and blocks. His return added strength to the Spartans defense. He finished the game with 14 points, five rebounds and one block.

However, the star of the game was Omari Moore. He leads the team in points, rebounds and assists this season. Moore showed off that versatility on Sunday by registering the third triple double in school history, with 18 points, 10 rebounds and 10 assists.

The Lobos started the game 1-of-11 from the field and their shooting didn’t improve much by the end of the first period. They entered halftime shooting at 29% from the field, and only registered two assists. Even so, the score was tied at 25 points each.

The second half did not go much better. At first the Lobos kept pushing back when San Jose State tried to pull away, but eventually the Spartans took full control. New Mexico struggled moving the ball and only added four more assists. Meanwhile, San Jose State’s offense was hot and went 20-of-27 from the field in the last 20 minutes.

“We didn’t do anything well in the second half. We didn’t move the ball offensively, which led to a lot of bad shots. We didn’t stick to the scouting report. We had to do three different ball screen coverages because nothing was working. Give them credit as well. They played hard and competed, and they are good when they are in rhythm offensively. It was an unfortunate step back for our guys, not because we lost, but our lack of playing the right way across the board.”

Up next, New Mexico is staying on the road as the Lobos head to Logan, Utah to take on the Utah State Aggies on February 22. 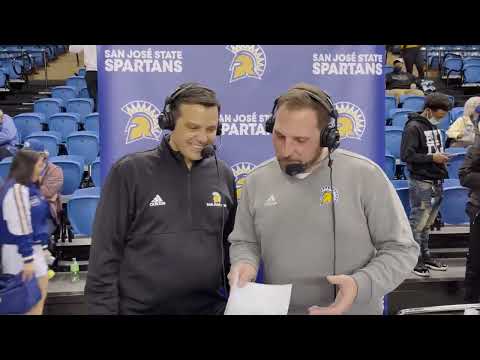