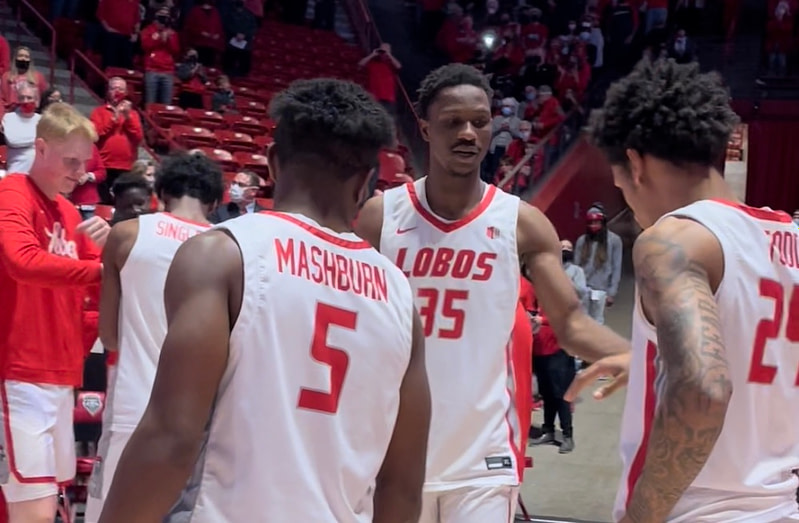 There were a few attempts at a comeback, but the Lobos had to settle for a 77-69 loss to the UTEP Miners on Sunday afternoon.

It was a physical game, which New Mexico hasn’t quite figured out how do successfully just yet. Three Lobos picked up technical fouls: Jaelen House, Taryn Todd and Jay Allen-Tovar. Head coach Richard Pitino said it was not due to bad officiating, but lack of discipline from his team.

“It’s just a matter of discipline, toughness and sustaining it over the course of 40 minutes. Good, bad or whatever happens,” Pitino said.

The first half was not great (37.0% FG for UNM), but the second half was off to a bad start that the Lobos couldn’t quite shake off. New Mexico went 0-f0r-10 until KJ Jenkins hit the first field goal for the Lobos in that period. By that point the Miners were up 49-34 and the clock read 11:52.

UTEP was up by as many as 18 points twice in the second half, although the Lobos had a couple runs that cut the deficit a single digit.

“Some shots just didn’t fall. They were hitting shots and we weren’t getting stops,” Jenkins said. “Momentum I guess? Basketball is a game of runs. We had our run and that was our chance to keep it going. But once they started hitting shoots, it looks like we just fell apart.”

Four Lobos ended the day in double figures with Javonte Johnson leading with 16 points and 9 rebounds. Gethro Muscadin contributed with 14 points, while Saquan Singleton and Jenkins registered 11 points each.  Souley Boum and Keonte Kennedy led the UTEP offense with 26 and 22 points respectively.

After Sunday’s result, UTEP improved to a 5-4 record while the Lobos dropped to 6-5 overall. Up next, New Mexico hosts SMU on Sunday Dec. 19.