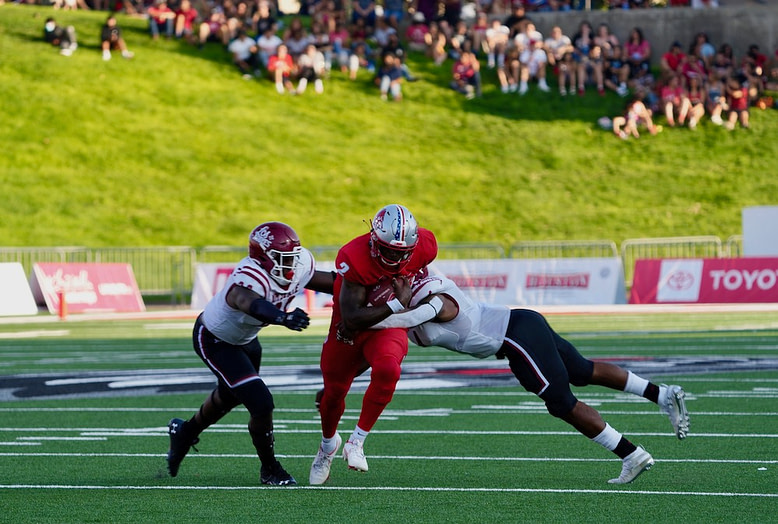 New Mexico head coach Danny Gonzales wants the Lobos to stop the programs “habit of losing,” and so far they are doing a good job. The Lobos took a 34-23 victory over the New Mexico State Aggies in the 111th Rio Grande Rivalry game on Saturday evening.

UNM is now 2-0 in the 2021 season, and is on a four-game winning streak dating back to last season.

Gonzales was happy with the win and said he saw big improvement with the defense. Although the offense had some good stats, he didn’t want to be complacent yet.

“I thought Terry did a nice job,” Gonzales said. “I’m a perfectionist, so as good as the 385 is, he missed some throws. He could’ve thrown for about 450. We’ll clean those up, it will give us a chance to be a little bit more explosive.”

The Lobos scored their first touchdown of the day just 60 seconds into the game with a 4yd rush by Bobby Cole.

Lobos lead 7-0 one minute into the game. pic.twitter.com/EhZy3hYQ73

Halfway through the first period the Aggies got a field goal, but the Lobos answered with another touchdown two minutes later with a 15 yd catch by Connor Witthoft. New Mexico dominated the first quarter, which ended in a 14-3 lead, but NMSU started fighting back in the second.

By halftime, the Lobos only had a slight lead of 24-20. The two touchdowns scored by the Aggies in the second quarter were twice the amount of touchdowns they had entering the game.

The third quarter did not see a lot of scoring from either team. The Lobos were the only ones to score, as Andrew Shelley got a 45 yd field goal with 53 seconds left in that period.

NMSU got a field goal in the first couple minutes of the last quarter, but a 58 yd catch by Emmanuel Logan-Greene became the touchdown that helped the Lobos put the game in the bag.

Up next, Lobos will hit the road to take on Texas A&M on Saturday Sep. 18.