The New Mexico Lobos put the last few games behind them and snapped a three-game losing streak with a 69-65 win over Air Force on Saturday afternoon.

Air force tied it at 9 points at the 12:39 mark. Jamal Mashburn Jr. quickly gave his team back the lead but Air Force scored again to make it 11-11. New Mexico did not find a significant lead in the first period.

The score was tied at 16 points each with six minutes left in the first half. The Falcons’ offense stepped it up and entered the break with a 30-24 lead shooting at 41.4% from the field.

Air Force held the lead for the first part of the second half, but eventually the Lobos caught up.

The Lobos were up by eight points with 9:26 remaining, but four minutes later Air Force had tied it again at 51 points. New Mexico had another good push but it Air Force made sure it was only a two-point game with 40 seconds left.

“Just keep fighting, even when adversity hits us, just keep going,” said senior guard Saquan Singleton after the game. “We knew we could win that game. We pulled through for the second half. We just kept fighting for each other.” 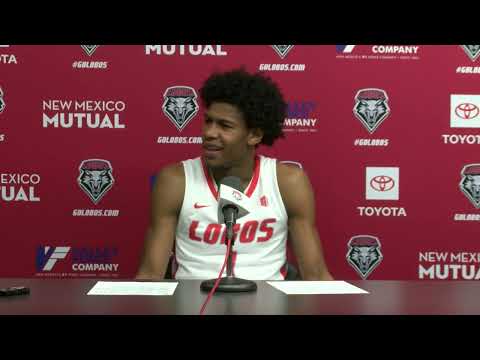