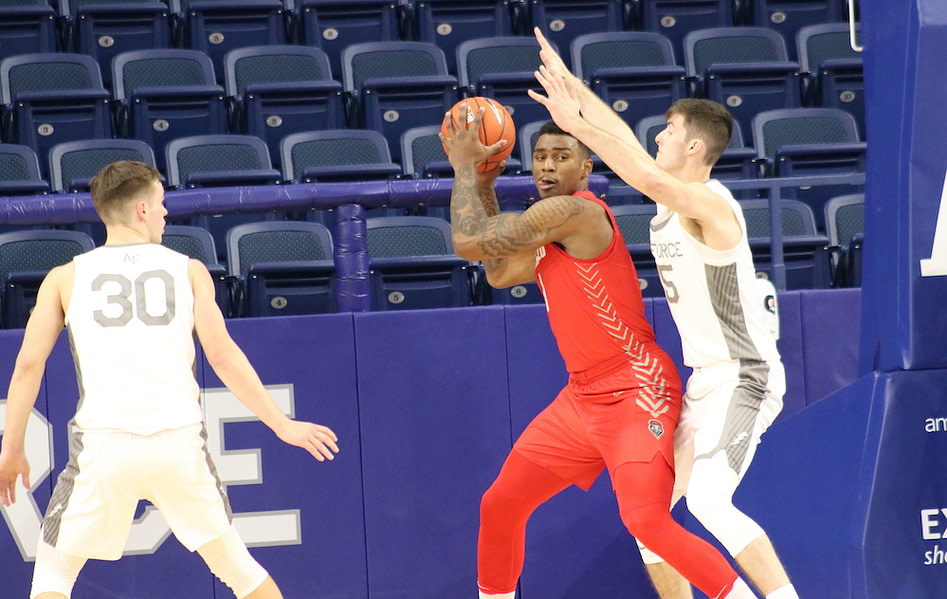 The New Mexico men’s basketball team snapped a five-game losing skid with a 73-65 victory against Air Force on Monday night.

“I’m not going to lie to you, it’s been awful this year. But when you get a win, it’s a win,” said redshirt freshman Bayron Matos with a big smile on his face. “We’re coming for the next one on Wednesday.”

The Lobos had just been swept by the Wyoming Cowboys and needed a way to finish their regular season schedule (without counting the postponed games) in a more positive way.

They started Monday’s game 10-2 before the Falcons put up more of a fight. Air Force’s AJ Walker responded to UNM’s strong start by scoring nine points.

The cherry and silver managed to enter halftime with a 32-25 lead, but the beginning of the second half didn’t look so good for the Lobos. Air Force had found a seven-point lead seven minutes into the second period. It was still too early to panic, but New Mexico had to get back on the right path as soon as possible.

This year’s Lobo roster has a lot of young and new guys, but this late in the season the group has had enough time to learn lessons even if most of those have been the hard way. Matos said Monday felt like the team had a different mindset.

“When the season started we said oh we’re young guys, we’re going to make mistakes,” he said. “But it’s time…. We need to play like grown men and be on the court like real players. We did that today.”

Head coach Paul Weir said the team seemed more refreshed after they got to visit assistant coach Dave Pilipovich’s (former Air Force head coach) home on Saturday and had a meal all together.

Whatever they had for dinner worked because the Lobos played with a little more energy and seemed to be having fun out there. The team collected seven dunks throughout the night.

New Mexico shot at 58.82% from the field, which is significantly better than their 41% season average. Three players scored in double digits. Matos contributed with 13 points by going 6-of-7 from the field, as well as seven rebounds. Valdir Manuel also had a good shooting night, making all seven of his attempts and collecting 14 points. Makuach Maluach once again led the team, this time with 22 points.

The Lobos will face the Falcons again on Wednesday at 4pm MT.