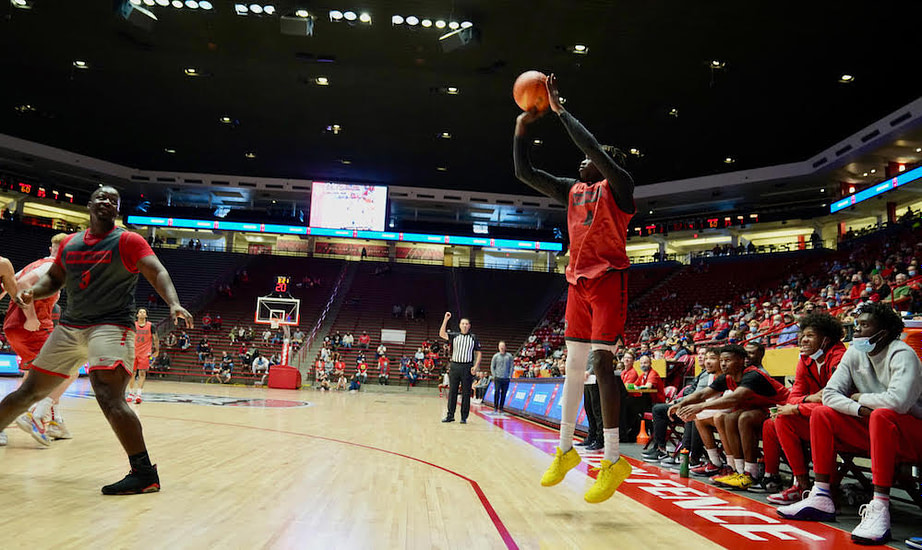 New Mexico fans got to see a sneak peek of this year’s Lobo men’s basketball team on Saturday afternoon with an intrasquad scrimmage at The Pit.

After the event, head coach Richard Pitino said the defense still needs a lot of work and that he hopes players can shoot well in real game situations, but that he would not look at any stats from this game to try to predict how the season will go. With that being said, here are some highlights from Saturday.

His shooting percentage wasn’t amazing, but the Lobo guard finished the night with 19 points, including four three pointers. He already seems to be one of the fan favorites and was asked to sign autographs after the event.

This is only a scrimmage, but New Mexico guard Jaelen House is going to be fun to watch this season. pic.twitter.com/vDeFbp8aIT

Francis has dealt with some injuries during his basketball career which have held him back, but Pitino said he is continuing to improve everyday and is trending in the right direction.

“He can shoot the basketball,” Pitino said. “I’ve looked into putting him in different spots on the floor offensively to see what he can do, but he can shoot. He knows how to play, it’s great to see him get some success.”

Someone else who can shoot the ball….

Chad Toppert can still shoot. The former Lobo played for UNM from 2005-2009, but he was one of the alumni invited to participate on Saturday as some current players were missing.

Richard Pitino on Chad Toppert: “We gotta find a waiver or something” https://t.co/2u5gGQzUYD

The sophomore guard was a talented shooter in high school, and he still looks great in practice but it didn’t quite translate during games last season. Pitino said Johnson continues to grow and that he hopes the team can take advantage of his abilities this season, especially with Saquan Singleton currently sitting out.

“He’s your next bigger wing. He’s got a big opportunity here depending on how long Saquan is out,” Pitino said. “He is one of the hardest workers on the team. Great character, pretty versatile.”

MBB: Lobos described as "under the radar"
Lobos get rematch with Wyoming in first round of MW Tourney
MBB Update: Oct. 10, 2019
Men's Basketball 357