Playing their second game of the season, the first against a Division I opponent, the Lobo women fell behind by 14 points early, but used a 20-0 second quarter run to regain the lead and eventually defeat Sam Houston State in a fast tempo 98-89 game to go 2-0 on the young season.  In some ways it was a very different game that Friday’s against Midwestern State, but some things were very much the same. 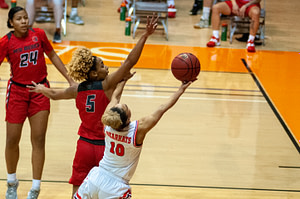 The Lobos started out very erratic.  There was an energy level from the beginning, but there was not a lot of coordinated direction.  UNM made some nice moves to get layups, but missed them.  The raced to double team a SHS player, but left the player with the ball unguarded.  They too often lost the ball on an unforced pass.  While the Lobos were shooting 4 for 18 in the quarter, the Sam Houston Bearkats turned 8 Lobo turnovers into a shot advantage, hitting 9 of 24.  Towards the end of the quarter the Bearkats opened their largest lead of 14 points.

The second quarter was totally different, and it was fueled by a much better Lobo defense.  In particular, the best ten minutes Shai McGruder has played as a Lobo.  She gave a reasonable

interpretation of Bill Russel, with 5 rebounds and three blocks in the quarter, influencing shot after shot by SHS.  Much of that was in a five minute stretch where UNM held the Bearkats scoreless and went from down 11 to take the lead.  The lobos finished the half up two, 43-41.  The tighter defense also allowed the Lobos to get better looks on offence, and they increased their 1st Q shooting 22% to a hot 62% in the second quarter.

The majority of the second half stayed close, as both teams continued to find was to score—though they took quite different approaches.  UNM spread the scoring, with six players eventually getting double digit points, led by Jayden’s 24, largely on 14 of 15 from the free throw line.  Combining her FTs with LaToya Duff’s, the two of them were 22 for 25 on foul shots.  More on fouls later.

On the other hand, SHS relied very heavily on two players for their scoring.  Cleveland (mostly in the first half), and Leggett (mostly in the second half) combined for 55 of the Bearkats 89 points.  It was obvious that is where the shots would be coming from, but the Lobos really could not stop either one.  Cleveland in particular was problematic, shooting 11 for 13 for the game, and it would have been more if she wasn’t limited to 26 minutes by foul trouble.  Both Cleveland and Leggett eventually fouled out.

For the second game out of two the game was slowed by 60+ fouls called.  This time, besides breaking up the flow—it is likely both teams would have been closing in on 100+ without the slowing effect of the whistles

—it favored one team.  The Lobos.  Not because the refs were one-sided, they really didn’t seem to be, but because of how the fouls were distributed.  Four of Sam Houston’s starters fouled out and the fifth starter ended the game with four fouls.  Two Lobos fouled out, but beyond them (Ahlise and AT) the fouls were spread out.  So when the Bearkat starts fouled out they had essentially no scores to go to, and couldn’t close the last 3 points of the Lobo lead.  In fact, over the last few minutes UNM gradually opened the lead up to nine at the end.  For UNM, they had more depth.  The six double digit scores was a Lobo team record, and following the five 10+ scores in the first game, looks to be one of the features the 2020-21 team will have all season.  Remaining unselfish in shot selection will be critical to the team this season.

UNM is trying to finalize a third preconference game against Prairie View on December 16th.  The Conference schedule will open on New Year’s Eve.