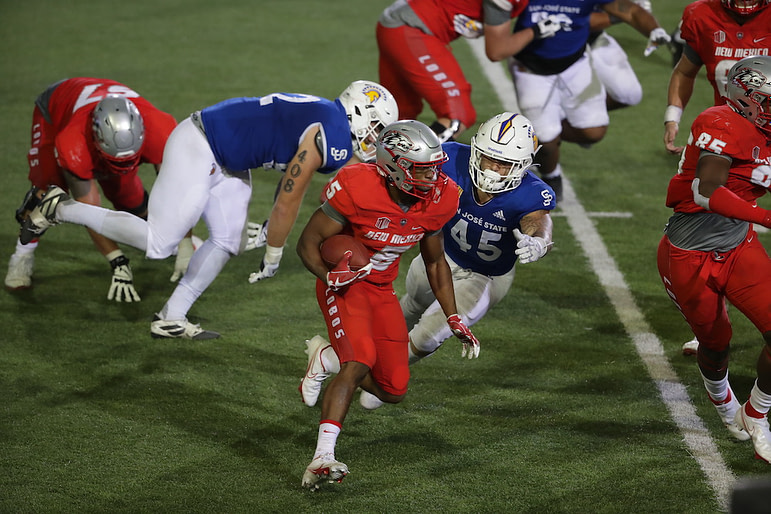 There are no moral victories for Danny Gonzales, but New Mexico’s first football game of 2020 showed the kind of fight that Lobo fans have been waiting to see.

Saturday’s game resulted in a 38-21 loss to the San Jose State Spartans. Things were tied 21-21 when the clock read 10:55 in the third quarter. The Lobos tried to catch up to the Spartans all game and they had finally achieved it when Tevaka Tuioti got a rushing touchdown and the Lobos got the extra point.

The comeback fell short of success as the cherry and silver failed to score again. The expectations haven’t been lowered, but the hope has definitely gone up.

“We got a long way to go,” said Gonzales. “I appreciate their spirit and their fight. We’re not aggressive enough, we’re not mean enough.”

New Mexico fans haven’t been too excited about their football program in years, but the messages on social media were positive on Saturday. “Effort” and “fight” were words repeatedly used to described their new team.

Thoughts on this first football game? 🧐

It hasn’t been an easy journey for the Lobos. UNM had their season opener against Colorado State canceled last week. Then the SJSU game, which was supposed to be a home game, was moved to California. With the recent spike of COVID-19 cases in the state of New Mexico and some players testing positive, the team had to return to only small group workouts instead of full practices.

As New Mexico started tightening restrictions again, the Lobos were going to be required to quarantine after returning from California. That wasn’t going to allow the team to properly practice and get ready for their game against Hawaii on Nov. 7.

The new plan is to return to Albuquerque on Sunday, then leave to Las Vegas, Nevada early this coming week to practice with less restrictions. It’s all happening fast, and as of Saturday night, even Gonzales didn’t fully know what his schedule will look like in the next few days.

It’s a crazy first season for the new coaching staff, but Gonzales is not known for excuses. While he said he is proud of how his players are handling the obstacles thrown at them, he’s not letting them off the hook.

“I told them in the locker room that it has to hurt like heck, hurt in their gut because it was the 16 straight loss for our school in conference,” he said. “That feeling should just sit in your gut and hurt. The only way to get rid of it is come back tomorrow to work and get ready to play the next one.”