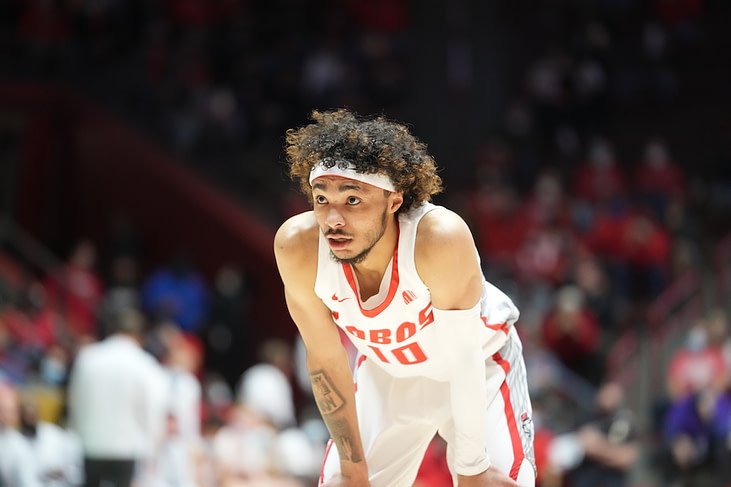 After a long break, the New Mexico Lobos opened Mountain West conference play with a 70-79 road loss to Nevada on Saturday night. This is Nevada’s sixth straight win over New Mexico.

The Lobos were up by almost double digits halfway through the first period after an 8-0 run gave them a 22-13 advantage. Senior guard Saquan Singleton was in the starting lineup for the first time this season. He tied his season-high 11 points going 5-of-6 from the field in the first half. He then set a new season record early in the second half.

After a three-point play with a dunk and a made free throw, Saquan Singleton has a season-high 14 points tonight!#GoLobos | #WeAreNM | @FS1 pic.twitter.com/Gw3gJzDsdk

New Mexico shot at 41.9% from the field before the break, but then went on to shoot at 30.3% in the second period. Nevada was up by as many as 19 points thanks to a 17-2 run with 5:30 left on the clock. The Lobos didn’t give up but their comeback efforts fell short.

Lobo head coach Richard Pitino said he thought New Mexico looked under control in the first half, but the next 20 minutes left a lot to be desired.

“It’s a 40-minute game and in the second half, we broke down trust,” Pitino said. “We have to give these guys more answers from an offensive flow standpoint. Since we don’t have a true post presence, we have to have great ball movement, which we do not have right now.”

Jamal Mashburn Jr. has only scored in single digits once this season (2pts against UTEP). We’ll see how he bounces back in the second half. https://t.co/RTcJUDfcNd

“In the first half, we ran the same offense and did a lot of good things,” Pitino said. “We just broke down trust in a big way in the second half. We have to have a great week of practice and get some trust back with each other.”

Offense was the Lobos’ strong point this season with a roster that counts with multiple talented guards. However, New Mexico has been struggling in this area lately.

Up next, New Mexico hosts Utah State on Saturday, Jan. 8 at 6pm MT.