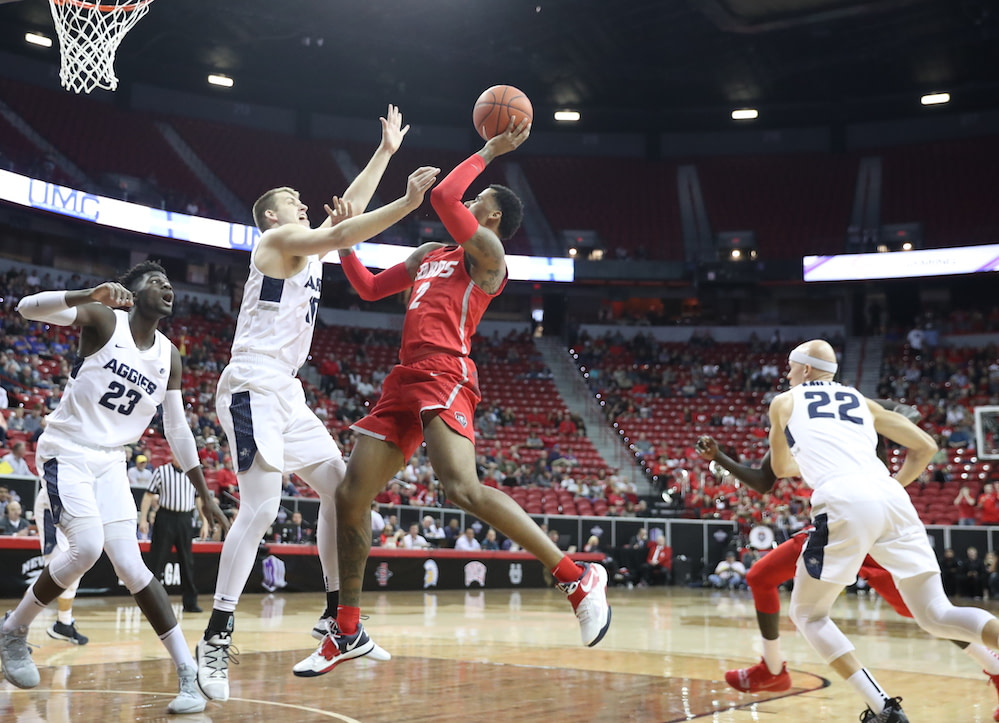 The focus of the last regular-season game for New Mexico could’ve been about a rematch against the team that send the Lobos home during quarterfinals of last year’s Mountain West Tournament.

Instead, this last time at The Pit is about whether or not the Lobos can pull themselves together before the trip to Las Vegas.

This will be the first and last time New Mexico and Utah State face each other this regular season. While the Aggies did deal with some injuries earlier, they have been more or less consistent. The Lobos have dealt with a lot more, which led them to look like a different team from the beginning of the season.

The Aggies (23-7,12-5 MW) are the no. 2 team in the conference right now, and are coming into Saturday’s game with a six-game winning streak, not having lost since Feb. 1. Their last victory was a 94-56 result over the San Jose State Spartans. Utah State is not at the top of the conference when it comes to making three-pointers. But during that game they showed they can’t be taken too lightly there. The Aggies opened that game hot from beyond the arc, making seven of their first nine three-pointer attempts.

Utah State has the MW Preseason Player of the Year Sam Merrill. Merrill leads his team in scoring with an average of 18.9 points per game.

Saturday’s game could be a high-scoring game as New Mexico ranks second in the conference (77.2 points per game),  while Utah State ranks third (77.1 points per game).  The Aggies have the second best defense behind SDSU, only allowing opponents an average of 63.5 ppg. The Lobos are second-to-last allowing 75.9 ppg.

The Lobos (17-13, 6-11 MW) are on a five-game losing streak. JaQuan Lyle, the team’s leading scorer, has been playing better than when he first returned to the team from an injury and suspension, but the results haven’t been quite good yet. Other players, like freshman Kurt Wegscheider, are getting more minutes in an effort to inject new energy into the team.

UNM’s Vante Hendrix has sat out the last couple games for discipline issues, but head coach Paul Weir said earlier this week that Hendrix could play this weekend and be part of the regrouping effort in Las Vegas.