Lobos hit the road for last time in the regular season

With the 2019-20 regular season almost finished, two struggling teams are hoping for a turnaround. New Mexico is set to play its last road conference game of the season on Wednesday night against the Air Force Falcons.

During their last meeting on Jan. 12, the Lobos got an 84-78 victory at The Pit with five New Mexico players and four Falcons scoring in double figures. New Mexico had a double-digit lead halfway through the second period. However, Air Force fought back and Scottie Lavelle hit a jumper with 48 seconds remaining to make it a three-point game. 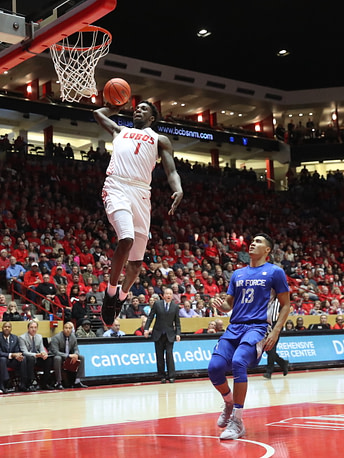 The Lobos still pulled off the win, but they will need to keep focused on Wednesday, especially since they’ll be on the road.

New Mexico
The Lobos have gone 3-9 in last 11 games, and are currently riding a four-game losing streak. Playing outside of Albuquerque has been a struggle, as the team holds a 3-9 record of away and neutral games.

The latest result was a 74-61 loss against the Boise State Broncos on the road. Head coach Paul Weir said he tried to “inject some energy” into the team by shaking up the lineup. Zane Martin didn’t come into the game until the second period and Vante Hendrix did not play at all. Freshman Kurt Wegscheider had his first start as a Lobo.

Did this work? Well, the team was trailing by double digits but got within six points with under eight minutes remaining. The New Mexico defense wasn’t able to hold on, allowing the Broncos a 12-0 run right after that.

The Lobo defense is second-to-last in the conference, allowing opponents an average of 76.5 points per game. But the offense is scoring the most points with 77.9 ppg.

Four active players are averaging double digits with JaQuan Lyle still at the top of the list even though he hasn’t been as strong of a player as he was earlier in the season.

Suspensions and injuries have made this team quite different from the one at the beginning of the season. The misfortune continue as sophomore Tavian Percy suffered a foot injury during Monday’s practice and is expected to be out for the remaining of the season.

Air Force
With a 4-12 conference record (10-18 overall) the Falcons are toward the bottom of the Mountain West standings with only two teams below them, San Jose State and Wyoming. Air Force doesn’t have a particularly strong homecourt advantage, as shown by the 7-7 record at Clune Arena.

The team is coming in with back-to-back losses. While the Lobos couldn’t climb up from a six-point deficit against Boise State this past weekend, Air Force wasn’t able to hold on to a six-point advantage against Wyoming. During their last game, the Falcons allowed the Cowboys to come from behind and steal a 78-72 victory with a 12-0 run toward the end of Saturday’s game.

Scottie leads the team with an average of 15.6 point per game. That stat is good enough to put him as the ninth best in the conference. His shooting percentage is third best at 45.5%. Scottie, the school’s 6th all-time scorer, has led his team’s offense in 14 games this season. One of those was when he scored 26 points against the Lobos.

In January, the Falcons had come into the Pit leading the conference in three-point percentage by shooting at 41.5%. They shot 32 threes in that game, but luckily for New Mexico only eight went in. Air Force is entering Wednesday’s game as the third best in the conference shooting at 37.4%.