UNM has yet to win against the Aggies with Paul Weir as a head coach. Isabel Gonzalez/The Lobo Lair

The Lobo offense wasn’t quite there when the New Mexico State Aggies swept the Lobos in this season’s Rio Grande Rivalry series with a 100-65 result on Tuesday. This wasn’t quite what experts predicted as the opening line posted for this game was UNM +6.
New Mexico had allowed the Aggies to get to double digits before Karim Ezzeddine put the Lobos on the board with a layup when the clock read 14:38.
By halftime, the Aggies had a 50-22 lead. The Lobos were shooting at 23.3 percent, making only seven of their 30 attempts. The away team was led by Karim Ezzeddine who had collected seven points. Not quite as impressive as Ivan Aurrecoechea who had already reached 17 points for the Aggies. He was followed closely by teammate Jojo Zamora’s 16 points.
While the Lobos have been struggling during the early part of games this season and then turning things around, this time things didn’t work out like that. By the end of the night, New Mexico’s shooting ended at 29.5 percent. NMSU finished at 50 percent.
“Tonight was one of the rare occasions when you are off to a great start and you lead from start to finish,” said NMSU head coach Chris Jans.

Zamora finished the night leading all scorers with 27 points thanks to 9-of-10 shooting from the field, making all six of his shots from beyond the arc, plus three points from the free throw line. For the Lobos, it was freshman Drue Drinnon who led the Lobos with 13 points.
The Lobos have yet to win a rivalry game with Paul Weir as the head coach. He took a while before he arrived to the media room for the post game press conference. When the Lobos lost to NMSU 98-94 on Nov. 17, Weir’s opening statement was an apology to Lobo fans. This time, he didn’t have an opening statement. Later in the interview he tried to put into words how he was feeling.
“‘Speechless’ is what I told the team after the game.” Weir said. “Speechless, sick to my stomach. Humiliated, embarrassed. So many things I could elaborate on but unfortunately at this point in time, it’s going to remain an incredibly humiliating defeat and we have to move forward.” 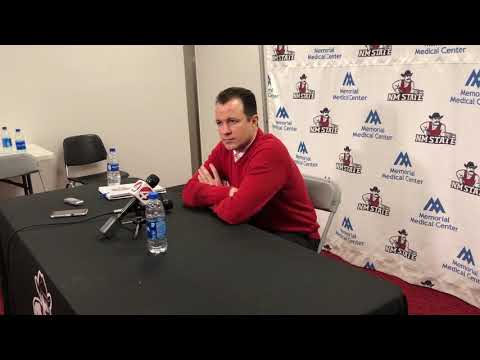 The Lobos have one more road game before they return to play in Albuquerque. Up next, New Mexico travels to Los Angeles to take on St. Mary’s for the 2018 Basketball Hall of Fame Classic at Staples Center.
Tony Snell drops Bogdanovic with highlight-worthy crossover
A hot second half sends Lobos to the next round of the tournament
MBB: Lobos described as "under the radar"
Men's Basketball 357