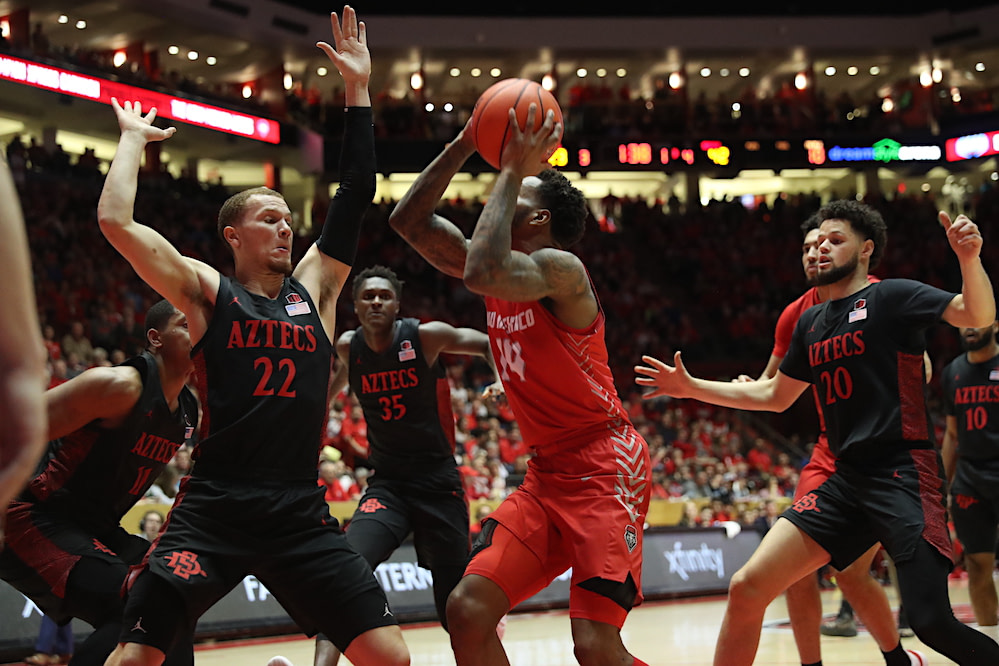 Lobos gain experience, but can’t get past No. 4 San Diego State

New Mexico’s undefeated streak in Albuquerque got broken as the No. 4 San Diego State Aztecs dominated with an 85-57 result on Wednesday night.

SDSU, the only undefeated team left in the nation, extended its school record for best start to 22-0. They top the Mountain West with a perfect 11-0 record. Meanwhile, New Mexico dropped to 16-7 overall and 5-5 in the conference.

The Lobos came into the game with a 13-0 record at The Pit, which was a program best as members of the MW. Although there were 13, 241 announced fans, home court advantage wasn’t enough for UNM. The Aztecs have handed three different teams their only home loss this season: Brighman Young, Utah State and New Mexico.

“We were going to need some shots to go down and we were going to need for them to miss some and quite frankly, they didn’t,” said New Mexico head coach Paul Weir. “By them hitting them and us missing them, the margin just kind of grew and grew. I think you just have to tip your hat to how great a team San Diego State was.”

San Diego State started the game on a 17-0 run. By the first media timeout the Aztecs were shooting at 77.8% from the field (7-for-9). New Mexico had unsuccessfully attempted seven shots, three of those from beyond the arc.

The home team didn’t score until the the clock read 15:16 with a Corey Manigault jumper. Their slow start continued and eventually the Lobos found themselves deep into a 21-point deficit. They bounced back to a 14-point game, but this potential comeback was very brief.

Jordan Arroyo goes to the free throw line after this. Check out that Maluach steal. pic.twitter.com/lKcK1Pvrww

By halftime the away team had a 23-point advantage at 48-25. Not surprising as the Lobos were allowing the Aztecs to shoot at 10-for-20 from beyond the arc and at 59.4% from the field. New Mexico was shooting at 30% from the field, 10% in three-pointers.

The second period started with SDSU hitting two three-pointers in less than three minutes. Coming into Wednesday’s game, the Aztecs’ season high three-pointers for a game was 13. They hit 10 in the first period against the Lobos, and a total of 15.

SDSU’s largest lead of the night was 35 points. This team saw five players in double digits with KJ Feagin’s 18 points leading all scorers. Feagin came into Wednesday averaging 7.5 points per game. Malachi Flynn, the team leading scorer, only got two points during the first period, then gathered 10 more in the second half.

Flynn’s 12 points throughout the night, achieved on 4-for-6-shooting, were lower than his scoring average of 16.8 ppg. However he led his team in assists with six of them and had zero turnovers. SDSU head coach Brian Dutcher said this is the type of basketball he likes his team to play.

“Once you get your best players playing that way, everybody else buys in. It’s contagious.” pic.twitter.com/wroBnKaKtP

He praised Flynn for moving the ball instead of trying to score more points for himself. Dutcher said selfless basketball gives his team an edge because it makes the Aztecs harder to guard.

New Mexico had two players in double figures, Corey Manigault had 12 and Keith McGee had 10. While no particular Lobo had a jaw-dropping performance, Weir did get to give some minutes to the young players who need to develop as the current team is missing most of their original starters.

Ten Lobos saw some time on the court, six of them underclassmen who combined for 94 of the 200 Lobo minutes that night.

Walk-ons Jordan Arroyo and Clay Patterson both got in the game as early as the first period. Patterson recorded 6:09 and Arroyo saw 20:54, both are season highs. Arroyo only hit one field goal but he led the team in rebounds with seven.

Up next, the Lobos hit the road to take on Fresno State on Feb. 1 at 3pm MT.