The Lobos did a lot of the right things on Saturday night, but their efforts still fell short against the Utah State Aggies.

Even though it ended in a 90-87 loss in overtime, the game saw some improvements from New Mexico. One of the most important ones was ball movement. In the first 14 games, New Mexico averaged under 13 assists per game. The team finished Saturday night with 19 of them.

Well, here they are doing just that… pic.twitter.com/SKDImcbi9W

Head coach Richard Pitino had to watch the game from home as he tested positive for Covid-19 on Saturday morning. Assistant coach Eric Brown was named acting head coach.

During the postgame press conference, Brown said the Nevada game on Jan. 1 had left a lot to be desired on the offensive side of the ball. This led to the coaching staff spending the week emphasizing the importance of sharing the ball to create better shots. One of the areas that was visibly better on Saturday because of this was three-point shooting.

The Lobos shot at 33.0% from beyond the arc through the first 14 games of the season, so three-pointers had not exactly been a strong point. However, New Mexico dominated in this area against the Aggies, recording 17 of them while shooting at 50% from deep. This percentage was even better than their overall 44.6% from the field.

Utah State players knew Jamal Mashburn Jr., the team’s leading scorer, was going to be one to watch. They guarded him accordingly but he still finish the night as the top scorer with 29 points. He got four three-pointers, but sophomore guard Javonte Johnson did even better. Johnson was responsible for seven of them, and he also finished the night with a career-high 23 points. Mashburn was impressed and said he will be looking to pass the ball to Johnson more often.

New Mexico was up by as many as 17 points (19:38 H2), but the Aggies shot at impressive 70.4% from the field in the second half. Brown said transition defense was one of the areas the Lobos struggled with the most.

With Saturday’s result, the Lobos dropped to a 7-8 overall record and are still searching for their first conference win with a 0-2 Mountain West record. Utah State improved to 10-5, 1-1 MW.

Up next, the Lobos have a road game against the UNLV Rebels scheduled for Jan. 11. 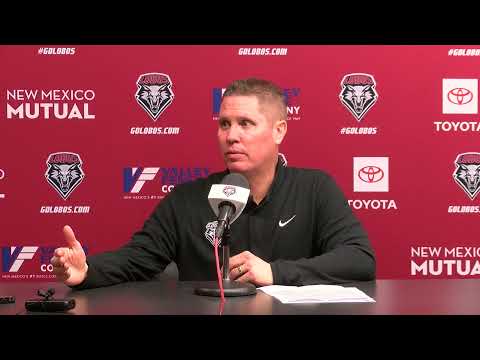